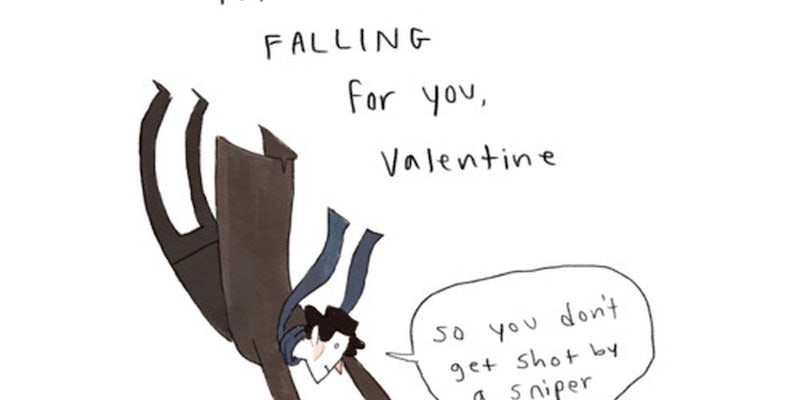 The fandom is "waiting on edge for the 3rd series," writes fandom-forecast. "Their sanity has yet to return." Here's what's been keeping them busy.

With its two main actors landing lead roles in the Hobbit and Star Trek franchises, it’s not surprising that it’s taking a while for the third season of Sherlock to arrive. Unfortunately for the viewers of the BBC’s cult Sherlock Holmes adaptation, this hiatus could not have come at a worse time.

The third and final episode of season 2 (spoiler alert!) saw Sherlock fake his own death, leaving Watson behind to mourn him in ignorance—a storyline directly inspired by the demise of the original Sherlock Holmes, who stayed dead for a good 10 years before his fans convinced Sir Arthur Conan Doyle to revive him.

The fandom is “waiting on edge for the 3rd series,” writes fandom-forecast. “Their sanity has yet to return, and it is unlikely it will ever completely heal even after the solution is provided.”

To say that Sherlock fandom is still going strong would be an understatement. One year on from the death of their beloved protagonist, Sherlock fans are just as active as they were the day after the episode aired. In fact, they’ve been out in full force this week, celebrating (or perhaps commiserating) the anniversary of Sherlock’s supposedly fatal fall.

Of course, they’d already developed various ways of coping with the pain. Here’s what’s been keeping the fandom busy for the past year.

“When I first watched Sherlock I didn’t understand how people could get so obsessed with a show with only six episodes with such long hiatuses
What did they do in between airings, I had asked myself
Get weird
Get weird is what they do” —boredsociopath

We don’t mean weird in the derogatory sense here. But once the original mourning period had run its course, most Sherlock fans (particularly on Tumblr) had to find another outlet for their feels. In contrast to the many posts from people who were still experiencing regular Sherlock-based crying jags, a variety of 4chan-style GIF memes began to emerge.

And along with the GIFs came the in-jokes. It’s normal for any subculture to develop a certain amount of references that are near-incomprehensible to outsiders, but Sherlock fandom seems to be especially expert in this regard.

From the Sherlock character tea blends to Red Pants Monday to otters that look like Benedict Cumberbatch, the intense nature of Sherlock fandom has led to any number of fanworks and mini-communities that go much, much further than merely writing fanfic or rewatching old episodes.

After all, this is just the latest development in the 120-year history of Sherlock Holmes fans—a group that still sees some of its members travel out on pilgrimages to see where Holmes first plunged over the Reichenbach Falls in 1891.

Cosplayers have found their niche among many successful TV and movie fan bases, but Sherlock fandom’s particular area of expertise is … corpse cosplay: 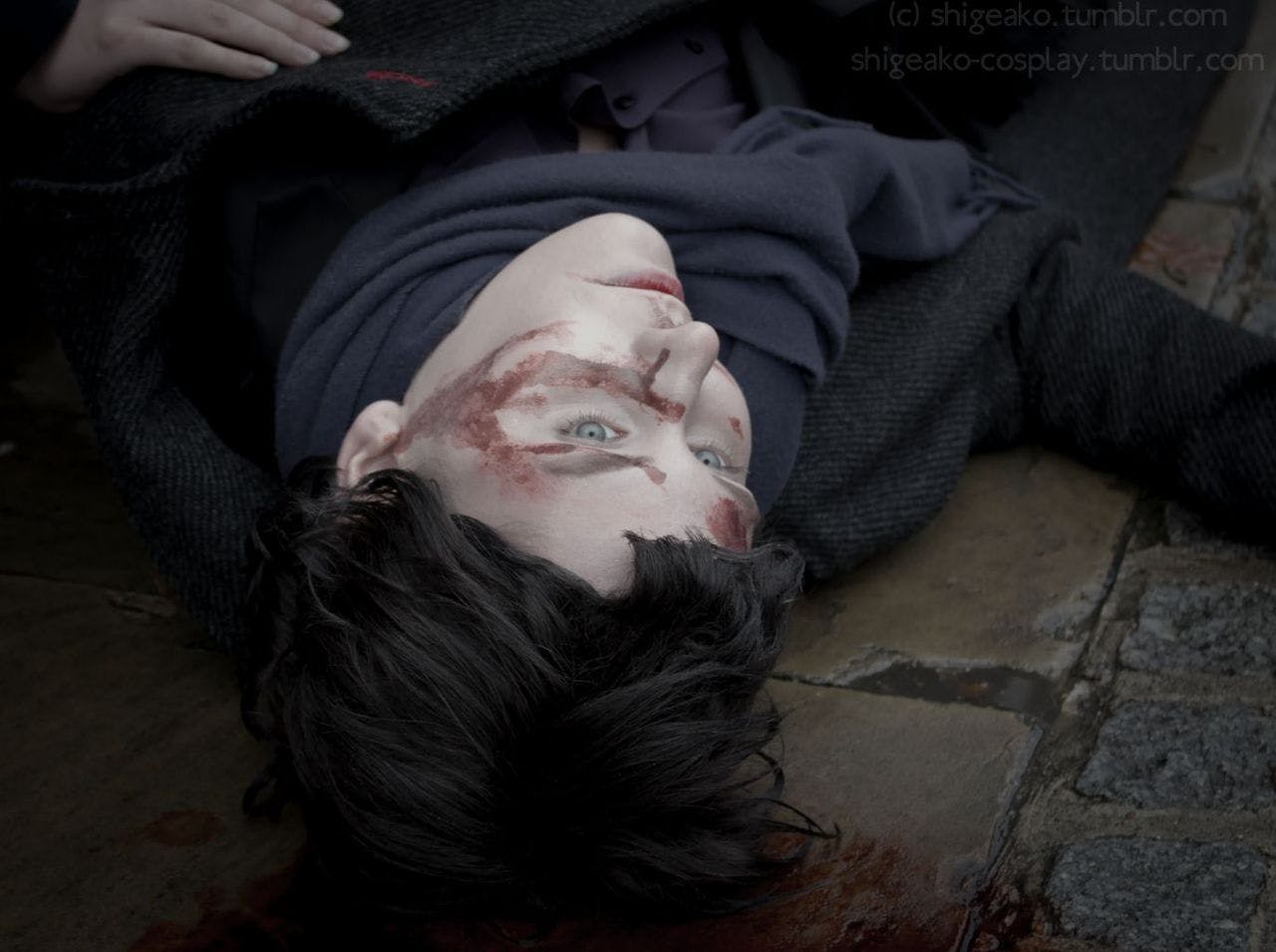 A brief glance at the Sherlock-cosplay Tumblr tag will tell you all you need to know about the sheer popularity of dressing up as Holmes and Watson (made easier by the fact that the only costuming requirements are, in a pinch, short hair and either a dark greatcoat or a grey knit sweater), but for some reason the idea of cosplaying Dead Sherlock has really caught on.

While Sherlock fans do like to embrace the ridiculous (case in point: this recording of someone playing the Sherlock theme music—very badly—on a recorder, currently with over 64,000 notes on Tumblr), there are some brilliantly serious and seriously brilliant fanartists out there as well. 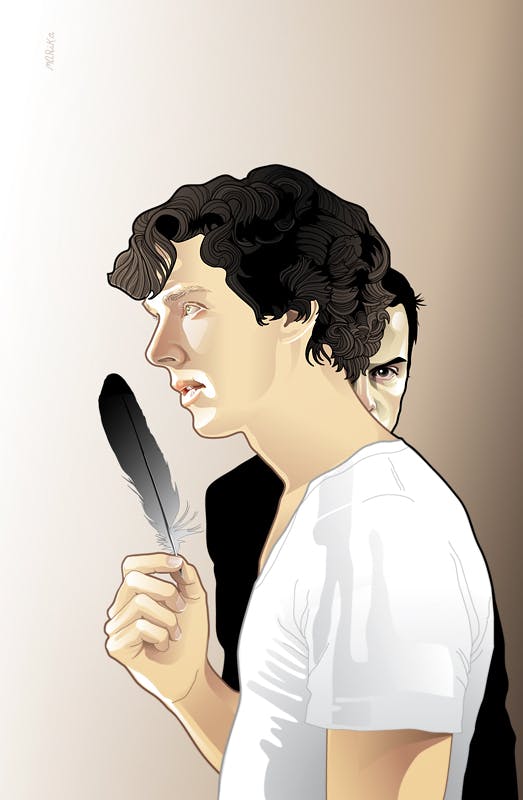 Not to mention useful infographics like the Reichenbach Survival Guide, as well as the aforementioned Red Pants Monday.

Since it’s a foregone conclusion that Sherlock will be resurrected at some point next season, the main thing people have to speculate about is how. The show is popular enough in the U.K. that several mainstream newspapers published their Sherlock Holmes survival theories the day after last episode aired on TV, but one year on the theories are still flying thick and fast online.

And after 12 months of rewatching the six available episodes, the theories aren’t just restricted to how Sherlock faked his own death; Tumblr users like holey-fred-geddit have begun to use their deduction skills to figure out such details as the hidden meaning behind John Watson’s PIN code. There’s even a Sherlock conspiracy theory generator.

Thanks to a fictional viral campaign in The Reichenbach Fall itself, real-world Sherlock enthusiast have been printing out “Moriarty was real” posters and scrawling “I believe in Sherlock Holmes” on bathroom walls and college desktops the world over: 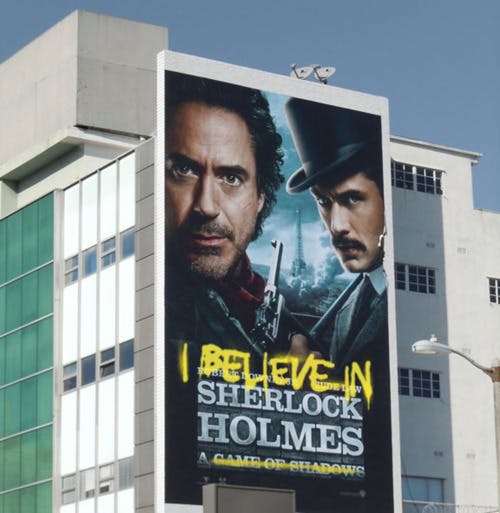