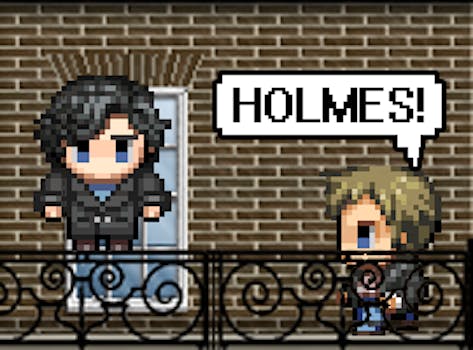 The role-playing game is on for “Sherlock” fans

Fans of the BBC's Sherlock have teamed up to create a full-fledged 16-bit RPG based on the show.

It may be months before fans of BBC’s Sherlock see anything of the show’s long-awaited third series, but the anticipation has proven inspiring for one group of fans. Sherlock: the Game is a recently announced fandom-wide project that aims to write, animate, code, and distribute a full downloadable RPG to Sherlock fans, all completely free.

Sherlock: the Game begins, of course, in 221B Baker Street. The starting concept for the game revolves around a month in the life of John Watson. The object? Keep Sherlock’s boredom meter from getting dangerously high by solving crimes—and keep your own money meter from getting too low.

While players will be playing as John, the game contains an impressively large cast of pixelized characters, known as “sprites,” based on the BBC show’s ensemble.

The project scope is impressive as well: what started as a two-person project has grown into a full-blown game production calling for at least 20 writers, pixel artists, puzzle designers, sound designers, and illustrators—and possibly more as the game continues to grow.

The developers, Lynxelia and Fenix, have cast the net wide in search of talent: they’ve advertised on Reddit, Twitter, DeviantART, Tumblr, LiveJournal, and Facebook. Although the support they’ve received has been enthusiastic—Lynxelia informed the Dot that “literally overnight,” the introductory post on their Tumblr gained over 6,000 notes—they’ve so far kept their developer requirements to a minimum, and have specified that they don’t want donations from fans.

“We are both huge fans of Sherlock Holmes and loved the BBC modern adaptation of the series,” Lynxelia says about the genesis of the idea for the game, which started out as a casual plan and evolved into something much larger:

One afternoon, we… began speculating about what sorts of games could result from an adaptation of [our favorite series]: an adventure game for Doctor Who, a servant RPG for Downton Abbey, an organization management sim for Breaking Bad…. eventually, we got to the topic of Sherlock.

It seemed as if the more we talked about it, the more ideas we got, and the more plausible it became.

What began as casual speculation quickly turned into actual planning. “We originally assumed it would be a small project that we could complete between the two of us,” explained Lynxelia, “[b]ut as we moved forward, our small plans started piquing a lot of interest.”

From the original plan of one developer and one artist, the Sherlock RPG has evolved into a series of puzzle games with three teams of writers—some to design “main cases” for the characters they’ve been assigned, some to write shorter “side cases,” and a team of “integration” writers to make sure all these stories combine smoothly. They’ll also work with a separate set of puzzle designers. The art teams are likewise sprawling: one to design crime scene photos, clues, and other items, one to do location shots and title screens, one to design the game promotional material, and, of course, a team to design and animate the cute little sprites. 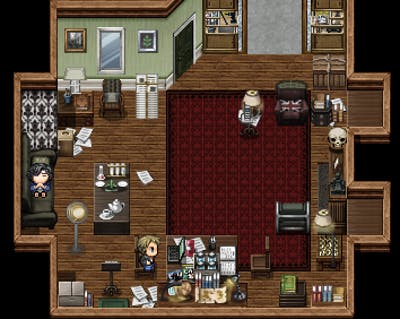 The game will also have sound design—but not voice acting. In true 16-bit tradition, “all character dialogue will be accompanied with classic RPG dialogue letter beeps at varying tones depending on the character.”

If this sounds like an ambitious task, it’s nothing the Sherlock fandom isn’t eager to take on. Although applications to join the team don’t close until the end of the month, they’re already pouring in. Lynxelia tells the Dot that the development team has been blown away:

On behalf of the development team, I’d just like to say that everyone here is extremely humbled by this fandom’s outpouring of support. We really did not expect to gather such a large following in a few short hours and we’re all a little panicked and overwhelmed at the moment from the sheer amount of responses and applications we are receiving. But despite our surprise, we’re confident that through the combined effort of all the talented people in this fandom, we can create something that will make the Sherlock fanbase proud.

Although the project is being done completely for free, the team might still run into legal trouble if the BBC feels the project is threatening its copyright. Other fan-made gaming projects, like the Brony games Fighting is Magic and Friendship is Witchcraft, have swiftly gotten the ax from zealous copyright-holders. When challenged on this point, the game developers responded that their game was protected via the “fair dealing” and “fair use” principles of U.K. and U.S. copyright, but that “if we are contacted by the BBC, we will have no choice but to shut the project down.”

If all goes well, and the BBC gives its blessing, Sherlock: the Game will launch next year, entirely for free. Fans wanting to join the development team have until April 30th to submit their applications.

For now, the game is most definitely on.