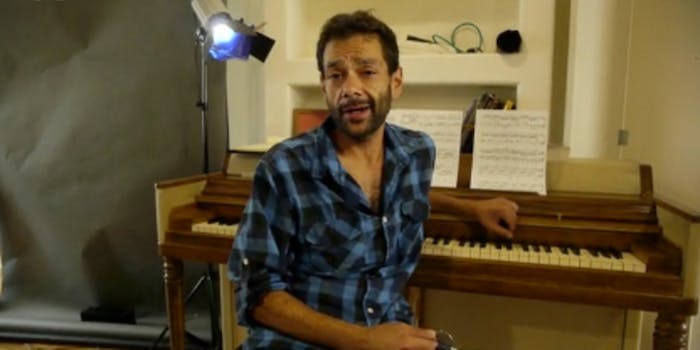 Can you crowdfund a stand-up career?

Do you remember the 1992 movie The Mighty Ducks, about a rag-tag hockey team coached by a down-on-his-luck Emilio Estevez? Now, one of the movie’s stars has started a Kickstarter to help in get back in the national consciousness.

Shaun Weiss played goalie Greg Goldberg in all three Mighty Ducks movies, and also appeared on Pee-Wee’s Playhouse, Boy Meets World, and Freaks and Geeks. He now wants to give fans “an unabashed, 100% transparent look at what it takes for a stand-up comedian to make a name for himself, starting from the bottom rung.”

Weiss reveals he has no experience in stand-up comedy, so yes, this proposed national tour could be very awkward and painful to watch. No word if Weiss’s recent “peeing charges” will be part of his act.

Can someone crowdfund a stand-up career? Is this a slap in the face to comedians who have spent decades traveling the circuit and building a fanbase? Well, Weiss says this is also about attempting to meet fans along the way, who might have been inspired by his performance in The Mighty Ducks, or the Ben Stiller movie Heavyweights:

I’ll participate in whatever activities the fans choose. Some of them are a little weird, so it’ll be funny to see us try to get along for the day. Whatever happens, my crew will be there to document every genuine moment for you.

At the end of the day, I will perform my comedy routine at a venue in their respective city. Several of the fans I plan to visit are located over seas (where I’m way more famous than I am in the states) so it should be fun watching me flail away like a fish out of water.

The goal is to eventually develop a Netflix series about his journey into comedy. If this sounds like a good idea to you, the deadline to donate is Aug. 19.