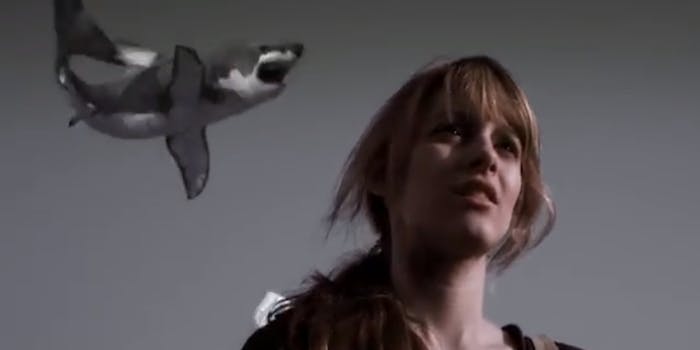 Sharknado fans have already named the next sharkpocalypse to hit the U.S. capital: Fin-Dependence Day.

As bloodthirsty as their favorite aquatic predators, Sharknado fans are ravenous for the third film in the unexpected hit cult franchise. And this time, they want to bring the sharkpocalypse to Washington.

A hilarious new Change.org petition earnestly lays the groundwork for the next sequel. We recommend playing the soundtrack to Bill Pullman’s Independence Day speech as you read:

Sharknado and Sharknado 2: The Second One, are the cinematic masterpieces America needs. In a time plagued by war, terror, economic recession, and congressional gridlock, the American people need somewhere to turn. Thanks to the work of SyFy, they have been able to turn to Sharknado.

After the first Sharknado took a bite out of the West coast, and Sharknado 2 chomped its way through New York City, what could the SyFy channel and B-movie factory The Asylum possibly do to top themselves?

Allow the political sharks of D.C. and real sharks to face off, of course.

This tale, like the spirit of the American people, must carry on.

It is for this reason that we, the people, ask that you film Sharknado 3: Fin-Dependence Day, and that you film it in our nation’s capital, Washington, DC.

DC is the city on the hill, the bastion of freedom, and the home of monuments to our nation’s great leaders such as George Washington, Abraham Lincoln, Theodore Roosevelt, Bryce Harper, and Ben Ali. DC is a city filled with history, majesty, and democracy. Most importantly, DC is a city that deserves to be pounded relentlessly by an inexplicable tornado filled with sharks.

Ask not what your country can do for you, but ask yourself what you can do to make sharks pummel our nation’s capital.

Four score and seven years ago, our nation rose together to overcome the greatest Sharknado known to man.

I have a dream that one day, children of all colors will live in fear of a third Sharknado.

We, the people, ask you to help us in our pursuit of life, liberty, and Sharknado.

We ask you to please film Sharknado 3: Fin-Dependence Day in Washington, DC.

As of this writing, 46 eager supporters are trying really hard to make Sharknado 3: Fin-Dependence Day happen. With a boost from Uproxx, they might even get to 100.

Sadly, with the third movie due out in 2015, it’s probable Sharknado 3 already has a working script. But there’s always hope for Sharknado 4!

In the meantime, check out the teaser for Sharknado 3 below, which seems to indicate that the sharks will be spending their time whirlpooling through the galaxy. Maybe they should subtitle it Shark Trek?