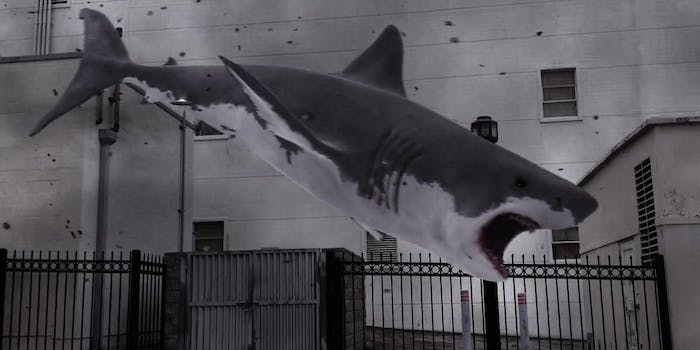 Mark your calendar and stock your fridge for July 30.

Some movies are so perfect that the idea of a sequel sounds like pure sacrilege. Casablanca. Citizen Kane. Blade Runner.

Sharknado is not one of those movies.

Imaginatively titled Sharknado 2: The Second One, Syfy’s sequel promises to provide more of the same old Sharknado goodness. Which is just as well, because all anyone wants out of this movie is a tornado full of sharks, and possibly some hokey dialogue to make fun of while playing a Sharknado-themed drinking game. A few typical lines from the new trailer include “Holy shark!” and one character literally uttering the line, “You jumped the shark.”

Sharknado 2 is a timeless classic about a bunch of sharks flying through the air in New York City. Tara Reid and Ian Ziering will reprise their roles from the first movie, and will be joined by Kelly Osborne as “Flight Attendant” and Billy Ray Cyrus in an unspecified cameo role.

If you liked the first movie, you’re pretty much guaranteed to enjoy this one. And if you hated it, then we strongly advise staying off Twitter for the duration of its first airing on Syfy on July 30, because it’s all anyone will be tweeting about that evening.