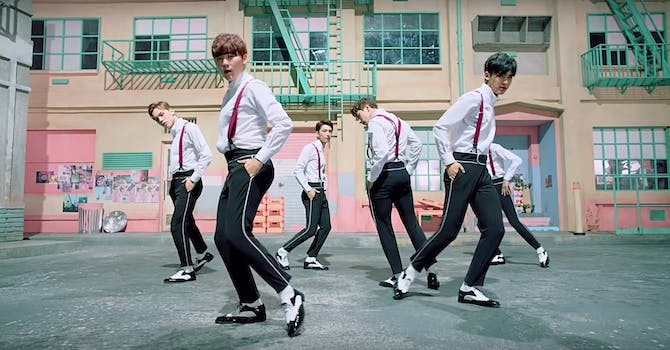 Our hearts are exploding, too.

Since releasing its first full-length album Love & Letter in April, fans have been clamoring for more from the quickly rising K-pop super group Seventeen. Now, the group has brought back a version two.

The rookies re-released the album, complete with fresh new tracks and an exciting new music video.

The boys of Seventeen portray the epitome of youth in the summer for their “Very Nice” music video. The lyrics describe both the excitement and nervousness of dates and romance, all wrapped up until their hearts explode—literally. The handsome boys all encounter their love interest in the video, unable to contain their emotions when their chests are bursting at the seams in a flash of colorful confetti.

The song captures Seventeen’s signature sound with adorable and upbeat verses paired with a catchy and energetic chorus. The boys chant, “Very nice!” to the background of bright, lively brass. Following the vibrant aesthetic of Seventeen’s previous videos, there’s plenty of colorful scenes and youthful choreography that more than utilizes the 13-member gang.

As a repackaged album, all 10 of the original tracks from Love & Letter remain, as well as five brand new songs. As per K-pop tradition, the new version of the album brings a different title track to be promoted on upcoming music shows. Right before summer, Seventeen promoted “Pretty U,” the original single of the album.

At the tail end of its promotions last month, the rookie group performed “Pretty U” at the KCON New York festival. The boys of Seventeen drew out the screams from a bouncy and enthusiastic audience.

Although having debuted just over a year ago, screams for Seventeen were arguably the loudest, aside from the deafening cheers for the headlining BTS. With its already established fanbase and the group’s success so far, some are speculating that Seventeen may be the next up-and-coming band to rival the popularity of senior groups like Exo.

Based on the KCON crowd’s eager reception, don’t be surprised if the boys of Seventeen start making strides stateside within the next few years.