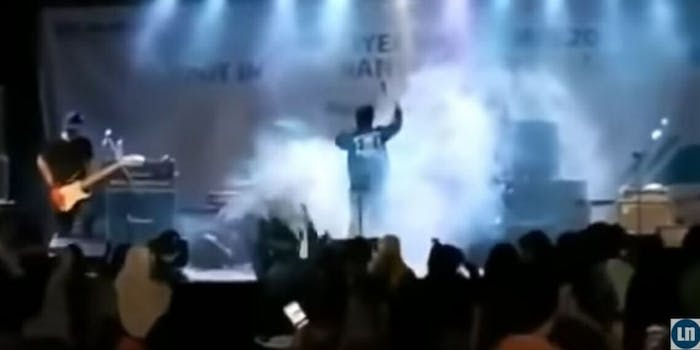 At least three members of the band have died.

A popular Indonesian pop group was swept off the stage by a tsunami, and in an emotional Instagram post, the band’s singer tearfully said goodbye to band members and wished for the return of his wife.

While performing at a resort on Saturday, the band Seventeen was struck by unexpected waves from a tsunami that, according to CNN, killed at least 281 people. The Guardian wrote that more than 850 were injured in the natural disaster. Dozens more are still missing, and the paper reports that the death toll is expected to rise.

Seventeen was performing on Saturday night when a huge wave destroyed the stage from behind and caused massive terror as the water rushed toward the crowd.

Singer Riefian Fajarsyah uploaded a heartbreaking video on Instagram. According to Rolling Stone, Fajarsyah said, “We lost our bassist Bani and our road manager Oki. Andi [drummer] and Herman [guitar] and Ujang [crew] have not been found. The rest are thankfully safe although suffering from injuries and broken bones. Please pray so my wife Dylan, Andi and Herman and Ujang can be found soon.”

Fajarsyah also said, via the Hollywood Reporter, that he was swept out to sea and that he feared he was going to die. But he said he found a floating box, and he used that to help him get to a nearby tree.

On his Instagram page, Fajarsyah also posted photos of his wife, Dylan Sahara, as he wished her a happy birthday and asked her to hurry home.

“Please come home my darling—I am longing for you,” Fajarsyah said on Instagram, via CNN. “I am still here—I am not going anywhere—I will pick you and we can come home together sweetheart.”

According to the Guardian, it appears the tsunami was caused by landslides under the ocean that resulted from the eruption of the Anak Krakatau volcano, but the newspaper wrote that there were no major seismic tremors that indicated a tsunami had been created. Reportedly, 29 people who attended the Seventeen concert were killed.