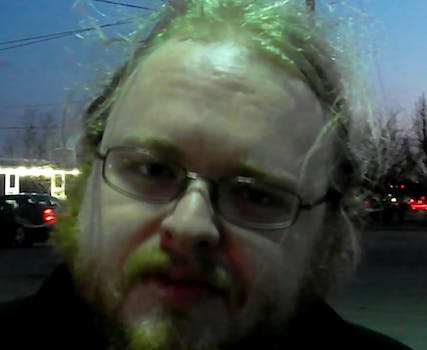 When Seth Thompson lost his job and housing, he hit the road hitchhiking. Along the way he started interviewing regular folks. Now he's seeking funding through Kickstarter to make this his job.

“Pretty much every person I’ve met on Reddit has been super fucking nice.”

For those more accustomed to reports about the seedy side of Reddit, that statement may come as a surprise. For Seth Thompson, though, the social news site has helped him in his travels as he hitchhikes across the U.S., making a Web series along the way.

Thompson, known as superfiedman on Reddit and Hitchbro (also the name given to the subreddit devoted to him) on YouTube, is using the Internet as one of his main resources for finding places to stay and people to help him get from city to city.

After losing his job and apartment “in rather quick succession,” Thompson, 22, decided it was time to set out on the road again following a hitchhiking trip last year, where he traveled from Marietta, Georgia, to Los Angeles.

This year though, he’s focusing on the northern states, eventually looping around to Seattle and Portland, and is interviewing ordinary Americans in whichever town he happens to be in.

While stationed at a Pittsburgh coffee shop with a pot of tea, Thompson spoke to the Daily Dot via Skype about his journey and plans for the future.

“There was a guy who picked up a group of hitchhikers—four dudes and a girl—and he was like, ‘These are the nicest people I’ve ever met in my life.’ I was like, ‘wait, people still do that?’ I started doing some research and I was like, ‘oh, shit, I guess it is possible to hitchhike, still. So I guess I’m gonna try.”

One of the main things Thompson is attempting to do with his Web series is not to just tell his own story, but those of others as well. His editor (and friend) Eric, has been pushing him to get others to tell their stories on camera, since “that’s what people are interested in.”

Thompson added. “At this point in the journey and the Web series, they know who I am. So it’s less about me and more about the people that I meet. I’ve been getting interviews with my hosts and rides.”

When asked what he was hoping to discover by carrying out such interviews, Thompson replied:

“A better idea of the world around me. I was always the socially awkward kid and I was always the guy who didn’t like people—the regular anti-social asshole-type deal. I decided that if there’s any good way that would get myself out of my comfort zone, it would be hitchhiking because there is no comfort zone when you’re hitchhiking. I’m hoping to meet people and learn people’s stories. I feel like it’s really interesting that everywhere I go, there’s someone with an interesting story.”

A broken laptop meant having to rely on a netbook to connect to the Web, though, making it much more difficult for Thompson to send the footage he’s recorded over the Internet to his video editor. That’s led to a delay in getting some of the videos uploaded to YouTube, and created a hitch in Thompson’s plan to have a real-time (or as close to real-time as possible) vlog.

Thompson’s family thinks he’s “crazy” for undertaking such an endeavor. “My mom does not sleep at night until I’ve told her that I’m okay for the night. My little sister was crying when she dropped me off … It’s an emotional thing for sure.”

The stigma of meeting people from the Internet probably didn’t soothe his mom’s worries, though Thompson’s met a lot of interesting people of whom have been willing to help him out, though communities such as Reddit and 4chan.

“I met a dude on 4chan and I traveled with a dude on 4chan. He was like, ‘hey, I’m in San Antonio (Texas), come and meet me.’ So (last year), I left Baton Rouge, going to San Antonio, hoping that this dude would be there. … It was awesome. He actually had family in Southern California. When we went out to Southern California, we hung out with his family and friends.”

After hitting Washington D.C. for a couple of days for the Reason Rally, Thompson is returning to base (he splits his time between Georgia and Louisiana when at home) for a month or so. However, he has no plans to take it easy.

Instead, he is planning to launch a Kickstarter project, through which he hopes to raise enough money to purchase a higher quality camera and have an emergency fund so he can crash at a hotel if he can’t find anywhere else to stay.

“I’ve had a proposal submitted through Kickstarter since before I did this because that was my whole idea. But it occurred to me that I have nothing I can show [potential backers]. I started trying to put together a video being like ‘yeah, I trekked across the country last summer.’ It occurred to me as I was putting it together that I had nothing I could hold up and be like, ‘I could probably do this [Web series] if you guys gave me money.’ So I had no reason for people to trust me that I could do what it is I’m doing here.

“The whole idea now is to show them this is what I can do with a shitty $60 camera and no budget. Imagine what I could do with a couple of thousand dollars for a camera and an emergency fund and money to do things. Having money to things as a result of that Kickstarter campaign would be an absolute dream. That is what I’m going for. I think it’d be not too lofty a goal.”

The first stage of the Web series journey only lasted a couple of weeks, so Thomspon could get some footage together for the Kickstarter campaign video, and show potential backers what he can do with some funding.

Regardless of whether the Kickstarter’s a success, Thompson doesn’t have plans to pull off the road and any time soon.

That’s pretty good advice for anyone.