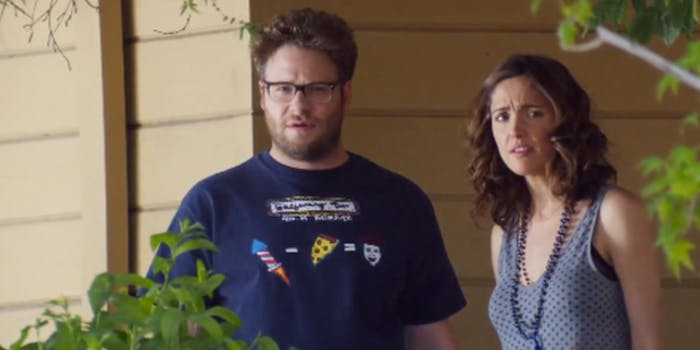 On Sunday, Washington Post film critic Anne Hornaday wrote an op-ed attempting to link the University of California at Santa Barbara shootings to the “toxic double helix of insecurity and entitlement that comprises Hollywood’s DNA.” In one paragraph, she singled out Seth Rogen’s new film, Neighbors:

“How many students watch outsized frat-boy fantasies like ‘Neighbors‘ and feel, as Rodger did, unjustly shut out of college life that should be full of “sex and fun and pleasure”? How many men, raised on a steady diet of Judd Apatow comedies in which the shlubby arrested adolescent always gets the girl, find that those happy endings constantly elude them and conclude, ‘It’s not fair’?”

Hornaday goes on to cite a statistic: “Women made up just 16 percent of directors, writers, producers, cinematographers and editors working on the top 250 movies of 2013; similarly, women accounted for just 15 percent of protagonists in those films.” This is a distressing reality, and yes, Hollywood’s rampant sexism needs to be called out, over and over. There are several other films currently in theaters, like Adam Sandler’s Blended, for instance, that are full of sexist tropes, stereotypes, and tired misogynistic jokes. There are decades of films that glorify violence against women.

However, attempting to tie a mass murder to the Seth Rogen/Judd Apatow manchild franchise days after a tragedy is lazy, much like attempting to blame video games for Rodger’s actions. Rogen and Apatow responded on Twitter.

.@AnnHornaday I find your article horribly insulting and misinformed.

.@AnnHornaday how dare you imply that me getting girls in movies caused a lunatic to go on a rampage.

.@AwardsDaily with every view her paper makes money from discussing a story no one yet knows anything about.Now it is a media profit center.

Most of Earth can’t find a mate– someone to love. People who commit murder of numerous people have mental health issues of some type.

Here is how it all works. Anne says something thoughtless. I say it is wrong then CNN asks everyone to debate and it becomes TV.

I said no. I wonder if Anne can prevent herself from going on and becoming part of how these tragic events become profit centers for media

Despite her tenuous connection, Hornaday’s article does offer some insight into the well-funded entitlement and institutionalized sexism in Hollywood filmmaking. Yes, Rogen and Apatow make movies that portray unrealistic male-female relationships. Is it fair to say they drove a mentally unstable man’s desire for “retribution”?