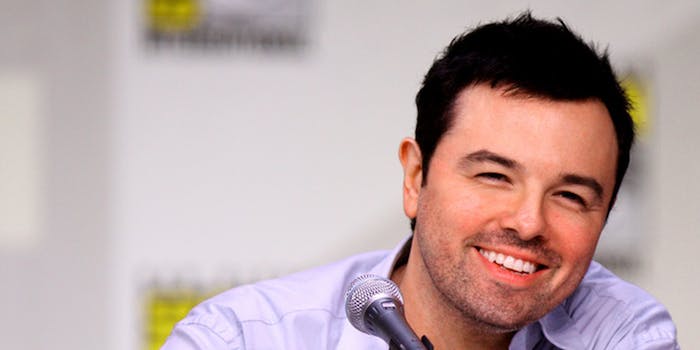 The animation kingpin wants you to take his show seriously—but he's dumbfounded when you do.

You may recall that last month saw a grassroots Internet campaign to resurrect Brian, an acerbic talking dog from the animated sitcom Family Guy, who was summarily killed and replaced in a stunt-promotional episode. One misguided soul allegedly got a memorial tattoo.

Trouble is, as of last night, Brian’s back from the dead, thanks to the time-traveling intervention of megalomaniacal baby and best friend Stewie Griffin. After the episode aired, show creator Seth MacFarlane, who also provides Brian’s voice, pushed a sanctimonious reading of the bizarre story arc on Twitter:

And thus endeth our warm, fuzzy holiday lesson: Never take those you love for granted, for they can be gone in a flash.

Gone in a flash, risen from the grave, whatever! As long as we’re learning about reality from cartoons. But MacFarlane wasn’t content merely to spell out the maudlin meaning of these plot twists; he also had to ridicule fans for falling into his trap (i.e., expecting logical narrative continuity).

I mean, you didn’t really think we’d kill off Brian, did you? Jesus, we’d have to be fucking high.

Yes, why couldn’t you guess what these hacks were really up to? Gosh, it’s like you didn’t even get a copy of the script back in pre-production. As an added bonus, this post serves to further undermine what MacFarlane had just held to be the point of the whole exercise. Your loved ones may vanish in an instant, but if they do, it’s likely just an elaborate ploy for attention.

There was one final smarmy comment to be made, however.

Oh and hey… thanks for caring so much about the canine Griffin. He is overcome with gratitude.

Indeed, a heartfelt thank you to anyone so irrationally attached to a fictional TV character that they find the time to write petitions about him—it’s that level of dedication that has made Seth MacFarlane, who clearly thinks you’re a bunch of idiots there to be toyed with for his own amusement, a very wealthy man. Though he probably could have made more money with the rumored spinoff series that turned out to be a hoax. Next time!