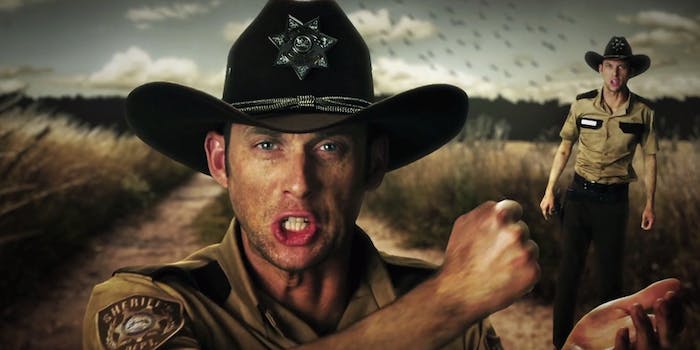 ‘The Walking Dead’ stumbles into ‘The Wire’ and ‘Breaking Bad’

Another Wire alum gets called into the zombie apocalypse, while Rick Grimes is forced to do battle with Heisenberg.

With filming for The Walking Dead’s fifth season under way, there’s still plenty of updates to keep the audience of a TV show on hiatus happy.

Deadline announced Monday that The Wire’s Seth Gilliam is joining the cast as a series regular in the upcoming season. The show bumped actors Andrew J. West, Alanna Masterson, and Christian Serratos up to series regulars in March, but this is the first new casting announcement for the show this season.

With the anticipation higher than ever, not much is known about Gilliam’s character. He’s listed as playing Michael Todd (not his real name), a man with a “friendly, puckish humor,”  who is also haunted by a dark secret, Deadline reports. It’s possible that the character was created solely for the show, as was the case with Daryl Dixon, but many fans are speculating that Gilliam is actually playing Father Gabriel (or Father Gabriel combined with another character), a preacher who first encounters Rick Grimes in The Walking Dead comics after leaving his church in the aftermath of losing the Prison.

And after taking a hiatus of their own, Epic Rap Battles of History has returned for a new season of vocal smackdowns—the first involving two of AMC’s more complicated protagonists.

Rick Grimes is pitted against Walter White, and while both of them have done their fair share of killing and other atrocities, they took time to step away and bring the other down even further.

The battle’s victor is left up to the audience, but that Breaking Bad Easter egg could suggest that Walter might’ve been the cause of all Rick’s hardships in the first place.