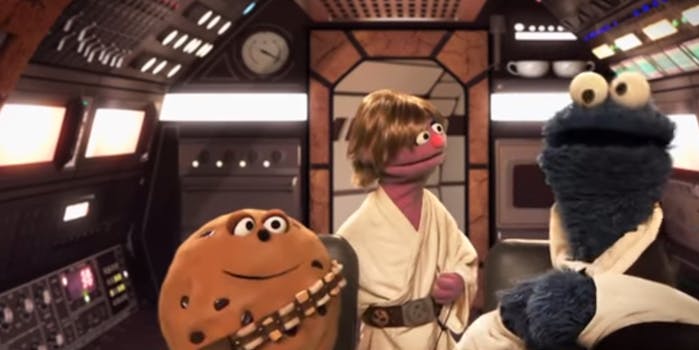 A long time ago, in a cookies and milky way galaxy far, far, away...

A long time ago, in a cookies and milky way galaxy far, far, away, a young rebel named Flan Solo seeks counsel on his enduring desire to eat his flying partner, Chewie the Cookie.

Sound weird—and delicious? We should mention that Flan Solo is Cookie Monster, the most famous consumer of circular baked treats in the universe.

Thanks to the Sesame Street YouTube page, the world is being treated to a mashup between the ever-popular children’s show and the longstanding sci-fi franchise, set to release its seventh episode next December. In the five-minute clip, Luke Piewalker and Flan Solo set forth across the galaxy in an effort to solve Solo’s cravings and eventually save the Princess Parfaita, held captive by the Galactic Empire.

They run into a great array of Sesame Street characters along the way, including the notorious Darth Baker, a charismatic evil leader with a skillet on his chest.

It’s fun, and something you could get used to. With 15 more months until Star Wars: Episode VII’s premiere, it’s safe to assume these clips are only going to surface more often.