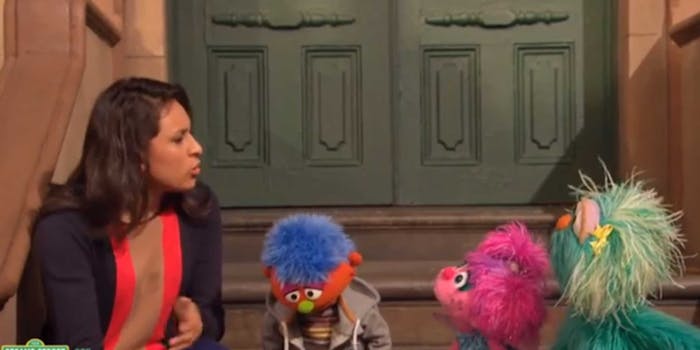 “Sesame Street” reaches out online to kids with incarcerated parents

Sesame Workshop, the company behind the ultra-popular children’s television program Sesame Street, has turned to social media to promote a new campaign aimed at kids with at least one incarcerated parent.

In June, the company introduced “Little Children, Big Challenges: Incarceration,” a digital toolkit that helps kids deal with the emotional hurdles and distress that comes with having a parent in jail.

“These children have to deal with the confusion, shame, and anger that accompany the sudden absence of a parent. The 2.7 million children with an incarcerated parent share similar experiences, but they don’t often feel comfortable talking about them.”

The first step in the initiative was to introduce Alex, a groundbreaking character who has a lot in common with the kids “Little Children, Big Challenges” is trying to reach.

On Tuesday, the official Sesame Street Twitter account began getting the word out by tweeting out heartwrenching Vine videos told from a kid’s perspective that somewhat resemble PostSecret confessions.

1 in 28 children in the U.S. have an incarcerated parent. Here’s what makes their experience uniquely challenging. http://t.co/igpRHHbL8a

When a parent is incarcerated, it’s easy for a child to believe he or she is responsible. https://t.co/ClJIU4iVtJ http://t.co/BHDVBAWT24

Children with an incarcerated parent feel a complex array of emotions. https://t.co/tfuSTLtvZD http://t.co/618d9jrGhZ

Contact between a child and an incarcerated parent is important, but can be complicated. https://t.co/4COyj0AKSZ http://t.co/yvHOarIZaf

Caregivers are invaluable when a parent is incarcerated, but many children still struggle. https://t.co/0kjkoXScpI http://t.co/tWiQEt0fCa

“Incarceration” is only the latest “Little Children, Big Challenges” campaign. In 2012, Sesame Workshop launched one for kids whose parents are divorced.

Photo via Sesame Street in Communities/YouTube