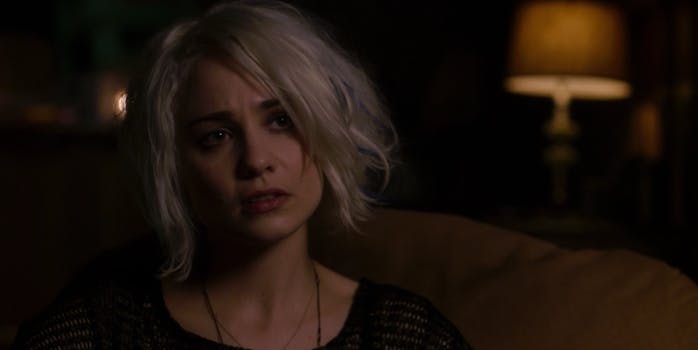 Two actors who weren’t IRL married to each other didn’t share a single bed until an episode of Bewitched in 1963. Nudity didn’t hit broadcast TV until NYPD Blue in 1993, and many viewers were outraged.

Cable opened the floodgates to high-concept adult TV with sexual themes, and independent streaming services have taken those themes to the next level. Netflix, with its original series and massive streaming library, has become a repository for the best and sexiest TV shows around.

At times this incredibly high-concept show can get confusing, but its sex scenes are staggeringly hot. Sense8 is lauded for its representation of LGBTQ characters. Its love scenes are rightly diverse, mixing race and gender in a way that’s rare in episodic television.

Shameless is a dark comedy, anchored by incredible performances from William H. Macy and Emmy Rossum. It’s also one of the biggest contenders for top TV shows with nudity.

Macy stars as Frank Gallagher, a single father of six kids and an alcoholic. His eldest daughter Fiona, played by Rossum, does her best to hold the family together. The results are often hysterical and occasionally heartbreaking.

Don’t just look it up online though. Sex is always hotter when you know the backstory. Shameless will leave you howling with laughter in between making you think sexy thoughts.

Based on the hit book series, Outlander follows a British WWII nurse named Claire, who is inexplicably sent back in time when she visits Scotland with her husband. Suddenly finding herself in the eighteenth century, she begins a return to Frank– even while falling in love with the rebellious Highlander Jamie.

Shonda Rhimes is no stranger to sex scenes on TV screens– with steamy cable scenes on shows like Scandal and Grey’s Anatomy, she’s proved she can make it hot. But her Netflix show Bridgerton has an even steamier reputation than any of her other shows to date.

This is a tale of social intrigue, following the hottest gossip of early 1800s London through the eyes of an anonymous columnist known as Lady Whistledown. It captures all of the uptight opulence one might imagine from the era.

But this period piece isn’t nearly as old-fashioned as you might imagine. Bridgerton takes place in an alternate history in which the myth of Queen Charlotte’s African ancestry was actually fact that changed the social standing of people of color. In addition to its diverse casting, the show doesn’t politely look away from anything obscene.

House of Cards may be everyone’s favorite political Netflix show, but Ingobernable is the service’s sexiest. The high-production soap follows the first lady of Mexico as she tries to discover who framed her for the death of her abusive husband.

At times brutally violent, Ingobernable isn’t always an easy watch. But it punctuates its intriguing melodrama with passionately directed love scenes. It’s easy to get lost in the moment.

Episode 10’s bathtub tryst would be legendary if this were an English-language show. Plus you get a fully formed political drama on top of all the sex on Netflix.

Ah, history, the heart of sexually charged TV dramas. This surprisingly explicit BBC production tells the story of the 10-year siege of Troy.

The series zooms wildly from one young adult issues to the other. The plot covers dysfunctional family lives, religious challenges, gender, and substance abuse.

Skins occasionally feels like an after-school special that got into its parents’ liquor cabinet. Still, it’s more Fast Times at Ridgemont High than My So-Called Life.

If The Sopranos were the aspirational crime family of the ’00s, the Borgias held the title for the 15th century. One held an empire of waste management, and the other became the pope. The Borgias is a ruthless historical drama and sexy Netflix show, rooted in murder and religious corruption in the name pursuing power.

There’s also plenty of beautifully shot sex scenes.  Just be aware the series eventually starts to explore the concept of incest, though Game of Thrones made it clear that’s not a deal-breaker for many viewers.

Of all the titles on this list, Hemlock Grove is easily the weirdest tv show with nudity. Vampire incest? Yep. A vampire who gets aroused by the sight of a feminine product in someone’s purse? It goes there. A werewolf who lets his face get eaten off for the greater good? Here’s a heads up if you get queasy.

Hemlock Grove isn’t afraid to be itself, that’s for sure. This hypergraphic tale of creatures that go bump and grind in the night never takes itself too seriously. While it may be a bloodbath, the showrunners remember to keep things fun. Just keep an open mind. Sometimes vampires want to have sex in a room full of blood bags.

11. How to Get AwayWith Murder

How to Get Away With Murder is a brilliant crime show featuring Viola Davis chewing scenery and court rooms with the best of them. However, it’s hidden selling point is the incredible amount of PG-13 sex on Netflix.

Showcasing a range of sexuality in a hot, yet not explicit way, How to Get Away With Murder is a sensual middle ground. Some viewers want things kept to their imagination, but this show gives you plenty to get you started.

You could remove the sex and still have an incredible show, but it’s nice to know you can be titillated and find a new favorite drama in one go. Just be prepared to wait for season 2 before Cable Girls steams up.

This pitch-black comedy about a suburban California single mother who starts dealing pot to make ends meet isn’t for the faint of heart. If Breaking Bad tried harder to make you laugh, you’d end up with Weeds. But for some viewers, the wildly swinging tone, especially in the later seasons, is hard to deal with.

Few shows combine tension and humor with the grace of Weeds. If you’re looking for nudity on Netflix and you can accept you aren’t always meant to like the main character, Weeds may just be your new favorite thing.

Richelmy is onto something. Over the show’s two seasons, Marco Polo has shown a remarkable detail for history, from its gorgeous recreation of the court of Kublai Khan to its casting of actual Mongolians to play Mongolian roles.

This lusty Netflix original series is as packed with big names as it is surprising amounts of nudity. Easy follows a group of modern Chicagoans as they navigate the wasteland of modern dating, from how technology complicates things to the age-old struggles of sex.

At first glance Roman Empire may appear to be another action series set in the past, dripping with gore and sweat. In actuality, the series is an extensively recreated documentary narrated by Sean Bean not unlike what you’d find on the History Channel.

What Peaky Blinders lacks in quantity, it more than makes up for in quality. Seasons 1 and 2 only have one nude scene each, while season 3 ramps things up considerably.

There’s nothing sexy about the war on drugs, but there’s plenty of sex in the drug war. Netflix’s series about the criminal empire of Colombian kingpin Pablo Escobar and his rivals is a brutal examination of the cost of cocaine trafficking.

However, when it takes time to dig into the nudity on Netflix, they’re as graphic and intense as the violence that surrounds them. (Here’s everything we know about Narcos season 4.)

Much like the show it spun off from, Narcos: Mexico isn’t an extraordinarily sexy show. Afterall, we’re talking about a violent examination of drug wars.

However, like it’s namesake, when Narcos: Mexico decides it’s time to show some sex on Netflix, they don’t hold back. Honestly after the blood boiling tension the series builds, it’s a treat to get some sensual relief.

Do you love Harry Potter but find that after years of slash fiction, you wish it was sexy for once? The Magicians might be for you. This Saturn Award-nominated SyFy series centers on the divergent paths of two childhood friends.

There’s Quentin, who is accepted into the Brakebills University for Magical Pedagogy, and Julia, who is rejected, forced to find her way into the world of magic. Along the way is some of the steamiest sex available on basic cable.

World history can be surprisingly sexy at times. The Crown, a Netflix original series, tracks the political intrigue and romantic dalliances of Queen Elizabeth II.

Starting in 1947 with her marriage to Philip the Duke of Edinburgh and continuing through her life, The Crown features flashes of passion that are sudden, vivid, and explicit, though actual nudity on Netflix doesn’t start to pop up until season 2.

Claire Foy is incredible as Elizabeth, with a superb supporting cast—including Matt Smith, John Lithgow, and Eileen Atkins—that help build the drama. (Here’s everything we know about The Crown season 3.)

Loosely adapted from Spike Lee’s 1986 comedy of the same name, Netflix’s She’s Gotta Have It is a hilarious and sensual comedy for modern times. Updating not only the time period of the original film but its portrayals of women’s pleasure and sexual assault, this is a TV show with nudity, a sharp sense of humor, queer representation, and a great affection for its characters.

This international steamer has the trashy charm of an R-rated Gossip Girl, complete with shockingly explicit sex scenes for a show about private school students. Three working-class teenagers are given the chance of a lifetime, entry into an expensive and elite private school.

On a surface level, Altered Carbon is a series that brings hard-boiled sci-fi noir to Netflix, telling a tale of murder in a world where your consciousness can be digitized. But beyond its grim sci-fi shell, Altered Carbon has another layer worth appreciating: absurd amounts of skin.

The show’s high-concept world is gorgeous, as is the cast. But beware—this is a particularly dark and violent show. While the vast majority of its sexual content is good old-fashioned intercourse, there are a few moments of sexualized violence that may be disturbing for some viewers.

Feef Symonds only had one dream: to become a British spy. She’s working her way through training when World War II ends, leaving her stuck as a civil servant secretary instead of following her dreams.

But then her American lover makes a fascinatingly dangerous proposition: spy on the British government for the United States to find Russian moles hiding in the service.

Netflix series aren’t shy about their sexual content, and Kiss Me First continues that fine tradition. In a not to distant future a lonely woman named Leila is hooked on the virtual reality gaming site Azana.

Perfume is one of the darkest dramas on Netflix, so please be aware of what you’re walking into with this tv show with nudity. A series of murders has been committed with one thing in common: each victim has had their scent glands cut out.