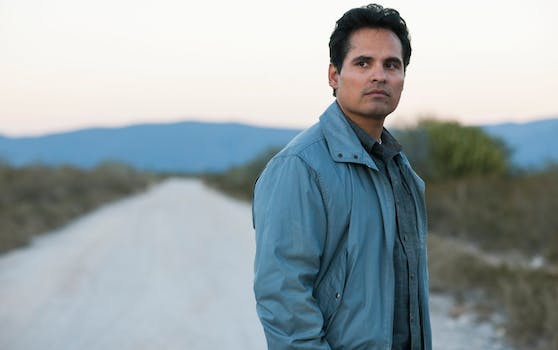 ‘Narcos’ season 4 has some big plans south of the border

The new cartel comes into focus.

The writers and producers of Narcos proved to viewers through its third season that the Netflix original series exploring our country’s battle against narcotics is much more than just a biopic about Pablo Escobar. On July 18, the show gave us some clarity about what to expect from its star-studded cast.

After spending a harrowing 10 episodes following the Cali Cartel, the third season ended the same way season 2 did—by introducing the next organization that’s rising in power to take over the drug industry. Here’s what we know so far about the looming fourth season.

Netflix confirmed on Dec. 20 that Michael Peña and Diego Luna would helm the series and that Javier Peña would not star in the season. This summer we learned that Peña’s character is Miguel Ángel Félix Gallardo, known in the crime world as Felix. He’s a sort of folk hero, known to be generous and fair, but also cunningly ambitious.

Luna is chasing him as undercover DEA agent Kiki Camarena.

Narcos will hit the reset button once again, with a new drug cartel and a new team of DAE agents. Season 4 will contain 10 episodes, like the three preceding seasons.

On Dec. 20, Entertainment Weekly reported season 4 would focus on the Guadalajara Cartel in mid-1990s New Mexico.

“We always knew that we would get to Mexico eventually,” showrunner Eric Newman told EW. “We decided on the Guadalajara cartel because it represents the beginning of the modern Mexican drug trade.”

In initial reports about the new season, many hypothesized that it would focus on the Juarez Cartel and Amado Carrillo Fuentes. Carrillo seized control of the Juárez Cartel after assassinating his boss, Rafael Aguilar Guajardo. He would certainly make for an interesting character: As we saw in season 3, Carrillo was known as “El Señor de Los Cielos” (“The Lord of the Skies”), thanks to the fleet of jets he used as part of his operation.

The plans for Narcos season 4 became less clear after Carlos Muñoz Portal was murdered while scouting for Narcos locations in Mexico in mid-September. His death brought up questions surrounding the safety of the cast and crew, and many worried production would have to move back to Colombia.

Pedro Pascal, who plays Javier Peña, said the show could only continue if it is “safe” to do so.

“We can’t do it if it’s not safe, we’re talking about lives,” he told TMZ. “If they want to do it they’ll figure it out in a safe way.”

But Newman told the Hollywood Reporter that after working with Mexican law enforcement officials, Netflix concluded that there was no specific threat to Narcos.

As if the murder wasn’t enough, more family members of Escobar have come forward to publicly condone the series.

Roberto De Jesus Escobar Gaviria demanded $1 billion from Netflix for “unauthorized usage of content.” In an interview with the Hollywood Reporter, Gaviria warned Netflix it was a bad idea to film in Mexico without his consent.

“I don’t want Netflix or any other film production company to film any movies in Medellin or Colombia that relates to me or my brother Pablo without authorization from Escobar Inc.,” he said. “It is very dangerous. Especially without our blessing. This is my country.”

As of July 18, we know that Luna is playing the new federal agent and that Peña will play the new cartel leader.

Mexican newspaper El Pais says that Amado Carrillo Fuentes will be played by actor José María Yazpik. He already made a bit appearance as the drug lord in Narcos season 3, foreshadowing a fuller exploration of the character. Newman confirmed the news to Variety in May.

Peña, played masterfully by Pedro Pescal, has been a focal point of Narcos. He succeeded in season 3 in bringing down the Cali Cartel, but it came at a significant cost—one that left him even more disillusioned with U.S. authorities.

“I’ve done enough. I’m through,” he tells his father at the end of season 3, as he watches a boat smuggle cocaine into the U.S. Comments made by Newman suggest we can take him on his word.

“I do think that we’ve told Peña’s story pretty effectively,” he told the Hollywood Reporter. “I don’t think it’s a particularly happy ending for him. But I think it’s certainly accepting the futility of this.”

Newman could not, however, confirm Peña would never return to the series—only that season 4 would not be about Pescal.

“I’d like to think that he still hasn’t made up his mind about whether he wants to come back,” he said. “It is, after all, an intersecting universe—the Mexicans did a lot of business with the Colombians.”

We’re still months away from seeing an official Narcos season 4 trailer, but on Dec. 20 a teaser hit the web.

Since Narcos returned for its third season Sept. 1, 2017, we can expect season 4 will air in early September 2018. The first three seasons are now available streaming on Netflix.