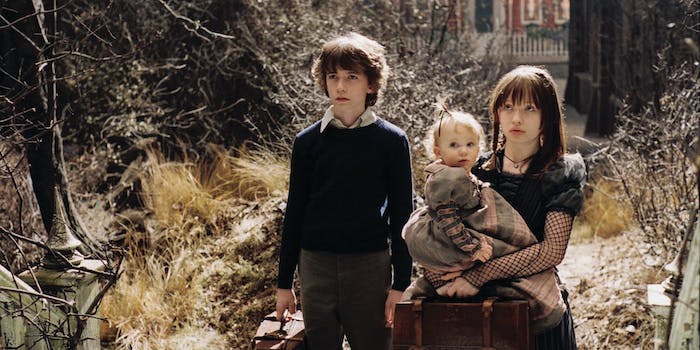 Hopefully this works out better than the movie.

Following its success with Orange Is the New Black and House of Cards, Netflix is branching out into the young adult market with A Series of Unfortunate Events.

Lemony Snicket’s gothic children’s novels have been bestsellers for over a decade, but their on-screen history has been a little rocky. The film version—starring Jim Carrey as the villain Count Olaf—was a moderate success, but was not terribly popular with the books’ original readers, nor with the author, who worked on multiple rewrites of the script before being removed from the project. (“I have a policy that I can’t say anything nasty about a movie that bought me a house,” Snicket said in a later interview.)

It’s unclear whether the Netflix series will be an adaptation of one or more of the books, but the series does go on for 13 volumes. As you can deduce from the title, A Series of Unfortunate Events is rather grim, like a morbid Roald Dahl story with a touch of Tim Burtonesque Victoriana. The books follow the disastrous lives of the orphaned Baudelaire children as they flee their malevolent Uncle Olaf, who wants to steal their inheritance.

Lemony Snicket is actually a fictional character himself, the pen name of Daniel Handler, who attends A Series of Unfortunate Events signings and interviews as Snicket’s “representative.” It’s likely that some version of Snicket will appear in the Netflix adaptation itself, perhaps as a voiceover.

Regarding the Netflix adaptation, Snicket said, “I can’t believe it. After years of providing top-quality entertainment on demand, Netflix is risking its reputation and its success by associating itself with my dismaying and upsetting books.”

Netflix added in its own announcement, “Mr. Snicket’s participation will be limited, given his emotional distress, but the project has the full involvement of his legal, literary and social representative Daniel Handler, who is often mistaken for him.”