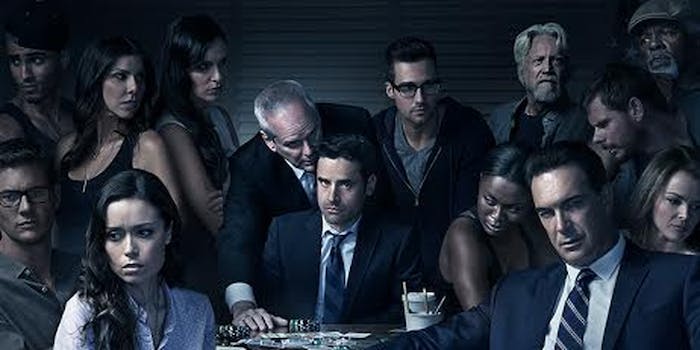 The 12-episode mystery where nothing appears as it seems (or seems as it appears) launches today.

As taut thrillers go, Crackle’s new original webseries Sequestered has a lot going for it. The 12-episode mystery where nothing appears as it seems (or seems as it appears) launches today and will be served up in two, six-episode packages with time in-between for catch-up, social buzz, and (one would expect) a heaping helping of PR.

The plot, which focuses on the kidnapping and murder of a prominent governor’s son, lands somewhere between your average James Patterson middle-of-the road beach read and a classic Stephen J. Cannell mystery. A slight hat tip must also be given to John Grisham’s The Runaway Jury for providing the concept of high-priced jury tampering. Directors Shawn Ku (Beautiful Boy) and Kevin Tancharoen (Fame, Mortal Kombat: Legacy) do an admirable job of keeping the multiple plot threads flowing in suspenseful synch, adding bits and pieces in micro doses in each installment. The level of acting, writing, and production is generally far above the norm for studio-backed (Sony owns Crackle) Web dramas.

Taking a page from the more successful TV mystery/dramas, Sequestered sets up quickly, revealing the primary story and a few of the key tangential plotlines. There’s the prime suspect—the kidnapped boy’s nanny—and the incontrovertible evidence that says he should fry. Then you have the young defense attorney (Jesse Bradford) who smells something fishy when one of the jurors is removed from the panel after being beaten up at local bar; shortly after, a prime witness being “permanently silenced” after wanting to recant. Let’s not forget the suspicious billionaire governor (Patrick Warburton), who appears to be involved in an illegal arms deal, and the defense attorney (Chris Ellis), who is involved in every shady part of the story and is not above setting his colleagues up to get his way.

And then you get to Sequestered’s jury of one’s peers, and that’s where the show veers a bit off the rails, offering us a comic book version of a typical jury (as seen on TV): the egghead professor (Ryan McPartlin), the June Cleaver mom, a T-shirt wearing slacker, the obnoxious foreman, the rough-around-the edges alpha female (Heather Dubrow), and the vulnerable one (Summer Glau) who believes she is being blackmailed via messages that come through her TV set. If these are my peers, I am likely to seek a plea bargain.

On the other hand, the rock-solid performance by the great character actor Bruce Davison—as the father of defense attorney Bradford and a former L.A. cop injured on the job—is as good as it gets. Davison, who has played everything from rat-loving Willard to Wyck, trust manager for George’s dead fiancée on Seinfeld, has the rare acting gift of being able to blend into nearly any acting ensemble. In Sequestered, Davison’s character takes a page from Cannell with a slight homage to Shane Scully, the antihero L.A. cop in a dozen of his mysteries.

Accustomed to working in a wide range of projects from Hot in Cleveland to The Real Housewives of Orange County, Heather Dubrow admits she was initially skeptical about delving into the world of made-for-Web programming. But one readthrough of the script from writer/creator Aaron Tracy changed her mind. “While it was not normally something I would do,” she says of her role as the nasty juror in the series, “the landscape of TV has changed so much, you can’t discount anything.”

The attention to detail and authenticity is something that sets Sequestered apart from other Web dramas, Dubrow adds. “In creating the jury scenes, they made us feel like we are part of a real jury. We were put in a small, hot, crowded room, sitting for hours. It felt like the real deal.”

Also a bit out the ordinary for Dubrow’s TV career (but apparently handled with great care by the crew) was her involvement in a rather steamy scene with a fellow juror in episode four. “I was concerned after the first read,” she says, “but it made sense for the character. I will have to blindfold my husband when that scene comes on.” Dubrow’s hard-edged character, which she says is an amalgam of a number of people she knows, is one of the more complex and mysterious members of Sequestered ensemble, and the actress/reality TV star says her measure of success will be somewhat based on how the audience reacts to the show.

Crackle has been teetering on the edge of becoming a major player in the original programming business, with one of the Web’s best and most-viewed shows, Comedians in Cars Getting Coffee as an anchor but little else to compete with Netflix, Hulu, and Amazon. At the end of April, Crackle announced a new lineup of shows featuring Sports Jeopardy, hosted by Dan Patrick; Tightrope, starring Bryan Cranston (Breaking Bad); and the Robert Downey, Jr.-produced Playing It Forward, a series that focused on promising street musicians.