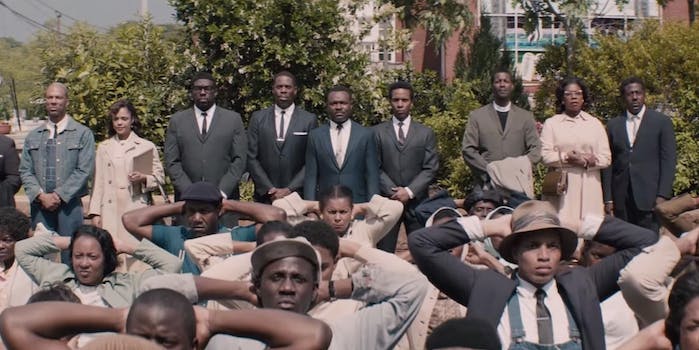 Students in these 9 cities can see ‘Selma’ for free

Business leaders have come together to underwrite free tickets for students.

Among its many roles, a powerful feature film can get people thinking. And talking. And taking action.

In the case of Selma, the movie that tells the story of Dr. Martin Luther King and the Alabama civil rights march 40 years ago, a number of prominent leaders want to ensure that no audience is left out by sponsoring free tickets to students across the United States. The program, which began in the New York-area (now sold out), has now spread to Boston, San Francisco, Philadelphia, Nashville, Sarasota, New Jersey, and Westchester, N.Y. Other cities, such as Milwaukee, Wis., are hopping on the bandwagon in real time, using Twitter as a means to gain sponsors to underwrite the costs.

Charles Phillips, CEO of Infor and a director on Viacom’s board, started the ball rolling for this unprecedented project over New Year’s weekend, reaching out to prominent African-American leaders in the New York area. Phillips sought the financial and promotional support of folks such as Tamara Harris Robinson, CEO of Haramat Advisory Services, who told the website Black Gives Back that 27 community leaders each donated $10,000 to allow New York City students in seventh, eighth, and ninth grades to see the film free of charge. Regal Theaters have opened their doors with free tickets to students in participating areas.

As the virality of the socially driven effort grows to educate and inform students about this important chapter in U.S. history, a number of celebrities such as John Legend and NFL star Justin Tuck have lent their encouragement via social media using the hashtag #selmaforstudents.

Social media has played a prominent role in the promotion of the film so far. In addition to a Facebook page, which has drawn more than 190,000 followers, Oprah Winfrey, a producer and star in the movie, and selected members of the cast, hosted a Jan. 10 Twitter meetup (#selmatweetup) to stir passion among potential viewers. Among the voices heard during that social media event were rapper/actor Common and actress Niecy Nash.

I want kids to love and respect themselves. RT @iamkidpresident: .@Common How can kids help you achieve it? @SelmaMovie #SelmaTweetUp

This movie has changed me 4ever. Particularly the walk across the Edmund Pettus bridge, the place of Bloody Sunday @OWNTV #SelmaTweetup

The social media push to drive student awareness is clearly not a marketing ploy disguised as an act of kindness. In its opening weekend, Selma did $11 million in box office revenue, placing second to Taken 3 despite playing in 1,400 fewer theaters.