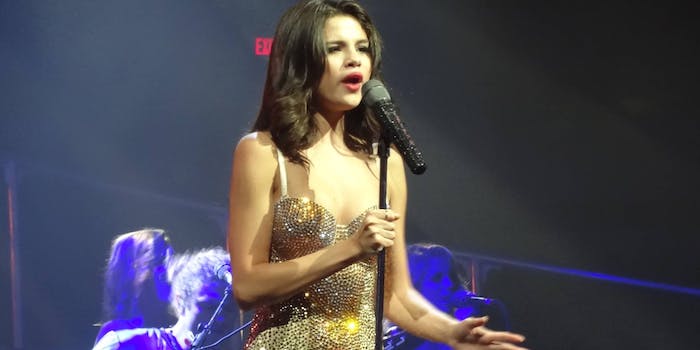 During her concert in Miami on Saturday night, Selena Gomez offered a heartfelt tribute to her slain friend Christina Grimmie.

Gomez was overcome with emotion during her show at American Airlines Arena, as she began crying in the middle of her song “Nobody.” The singer apologized to the crowd and spoke of Grimmie, who was shot and killed while signing autographs a day earlier in Orlando.

Gomez dedicated her performance of “Transfiguration” to Grimmie during the show.

On Saturday morning prior to the concert, Gomez tweeted a photo of herself and Grimmie with the caption, “My heart is absolutely broken. I miss you Christina.”

My heart is absolutely broken. I miss you Christina pic.twitter.com/KWGwZZlj4t

The 22-year-old former Voice contestant had been friends with Gomez for years. Gomez’s stepfather Brian Teefey served as Grimmie’s manager after discovering her on YouTube. Grimmie performed as an opener for Gomez on her “We Own the Night” tour in 2011.

Grimmie was killed after her concert on Friday night when 27-year-old Kevin James Loibl opened fire during her meet and greet with fans. The shooter was armed with two handguns and a hunting knife and fatally shot himself after being tackled to the ground by Grimmie’s brother Marcus.

“Words cannot begin to describe the pain I am feeling. I learned this business through the eyes of a father and Christina was like a second daughter to me,” he wrote. “As family Mother, Father, and Brother made the ultimate family sacrifice to support Christina on her musical journey. They did nothing but love her and support her as family the best they knew how, the only worry I want them to have at this point is that of recovery.
Grimms I love you, and miss you beyond comprehension.”