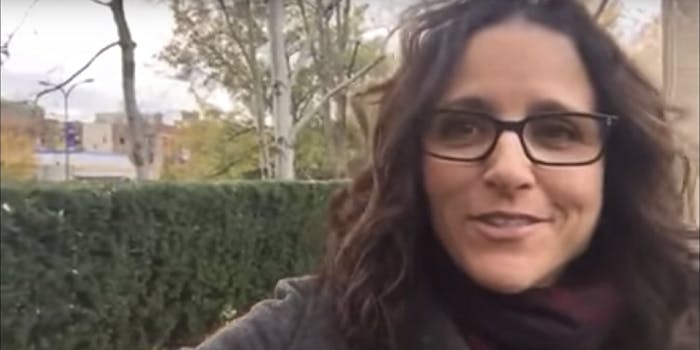 When Seinfeld was one of the top-rated shows on TV, the creators prided themselves on a “no hugging, no learning” policy. It’s what made characters like George and Elaine seem so self-centered, unsympathetic—and utterly hilarious.

In real life, however, series stars like Julia Louis-Dreyfus and Wayne “Newman” Knight are far better people. And they proved that recently after learning about a dying Seinfeld fan—as the series stars flooded the man with kind-hearted video messages in the days before he succumbed to lung cancer.

RELATED: Cops put the squeeze on Jerry Seinfeld and his illegal lemonade stand

“Hi Jim, Julia Louis-Dreyfus here,” says the actress in one of the videos, which 67-year-old super-fan Jim Calder was able to view just hours before his Nov. 7 death. “I’m so thrilled and happy to hear how much you’ve enjoyed Seinfeld along with your family … You have a wonderful son who clearly adores you, so, congratulations on that.”

Calder’s son James and his wife came up with the idea, to cheer up their father after his two-year battle with the illness. “We immediately thought of his favorite TV show, Seinfeld,” he writes onThe Huffington Post, saying they wanted to make his most recent birthday extra-special. “We started planning how to pitch this to the Seinfeld characters and started to reach out through published articles about the project, social media outreach and word of mouth. The Seinfeld birthday project was born, but we really weren’t sure how and if it would flourish.”

The first to respond—hilariously in character—was John O’Hurley as the cocksure J. Peterman. Soon after, Patrick Warburton’s dim-witted fan favorite David Puddy told Jim about his adventures eating a 1-pound bag of M&Ms.

Jerry Stiller—who played George Costanza’s Festivus-loving father Frank—and Lawrence Madley (Larry the cook) both sent in-character videos, but requested that the family keep them private. The most powerful response, however, may have come from Cosmo Kramer himself.

Michael Richards contacted James Calder and asked if he could schedule a personal phone call with his father. “[He] wanted to actually call my dad on the day of his birthday to wish him the best and have a chat,” James writes. “I was blown away by his kindness and generosity. I did try to coax him to create a video message as well, but he shared that he wasn’t interested in the publicity and just wanted to help me wish my dad a happy birthday.”

Sadly, Jim never lived to see his birthday. But that makes James all the more appreciative of the messages from his dad’s favorite cast—and thankful that he decided to show his father the videos early to lift his spirits.

“He was shocked and mystified about how we were able to reach the Seinfeld cast members,” James writes. “He really felt the love and support.”