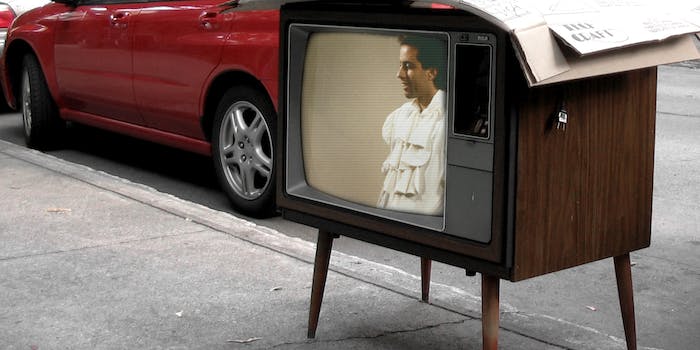 Jerry, George, Kramer, and the Assman are already on board.

To commemorate the 25th anniversary of the Seinfeld episode “The Puffy Shirt” on Nov. 16, the Bakersfield Condors of the minor league ECHL will be wearing jerseys that replicate the iconic garb Jerry Seinfeld agreed to wear as a guest on the Today Show. In that memorable episode, Kramer’s low-talking girlfriend inaudibly asked Seinfeld to wear the shirts she manufactured when he appeared on the NBC morning show. Just to be agreeable, he said yes.

And so a ’90s pop culture legend began.

For devotees of the series, it gets even better. Each jersey will bear the word “Condors” on the front wrapped in the TV show’s logo. The back of each of the game day shirts will bear the name of a famous character from the show. Already cast in dark ink are Jerry, George, Kramer, Newman, Frank Costanza, Puddy, J. Peterman, Jackie Chiles, Bubble Boy, Keith Hernandez, Mickey Abbott, and, of course, the Assman. But fans will get their say via Facebook and Twitter for which five additional character names will be added to the list to complete the set.

Early comments on Twitter about the promotion, even more than two months before the game, are on point.

An ESPN reporter has this suggestion for the Condors’ PA announcer:

And while they’re at it, the Condors would like to feature an unusual mode of transportation on Puffy Shirt Night:

If anyone has a spare rickshaw we can borrow on Nov. 16, that would be great. #Condorstown

Why not weave in another classic line from an episode featuring Terri Hatcher?

One thing is for sure: Whoever heads promotion for the Bakersfield Condors deserves a promotion, if not part ownership in the team. It won’t be easy for another sports team to outdo this theme night (although I’m betting the Charleston Riverdogs could give them a run for their money).

As for name suggestions? I’d go with Babu Bhatt, Uncle Leo, Justin Pitt, or even Kenny Bania. If we’re going obscure, how about Ray McKigney (also in the Puffy Shirt episode)? One can only assume the shirts will be made by Vandelay Industries from a mix of velvet and latex.