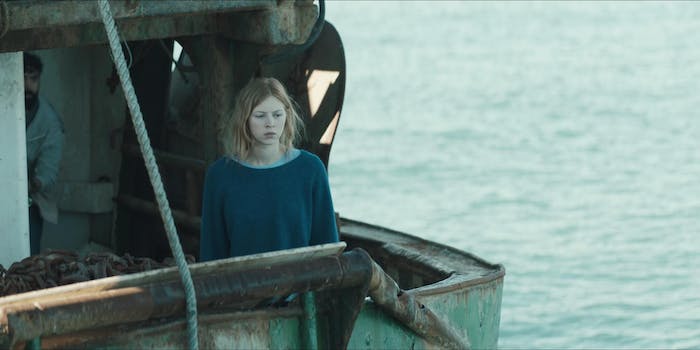 This atmospheric monster movie deserves to be a hit.

If a film follows in the footsteps of Alien, I’m already primed to enjoy it, even if it’s openly derivative. Sea Fever, however, is the real deal. Written and directed by Neasa Hardiman, it uses the familiar formula for Alien-style thrillers (a tense, self-contained battle against a deadly monster) to tell a more grounded story. It would actually make an interesting double-bill with the recent Kristen Stewart vehicle Underwater. Both emerge from the same subgenre, but one is enthusiastically unoriginal monster schlock, while the other focuses its attention on smart characterization and a realistic, immersive setting—while also including some satisfyingly gruesome creature effects.

Set on an Irish fishing trawler, Sea Fever stars Hermione Corfield as Siobhán, a socially awkward marine biologist. She joins the crew in order to study anomalies in their latest catch, immediately making a bad impression thanks to her red hair (unlucky at sea, apparently!) and shy, standoffish personality. There’s a dysfunctional family vibe onboard, starting with the skipper Gerard (Dougray Scott). He and his wife (Connie Nielsen) have run this boat together for years, but their money problems are serious enough that they’ll lose it if they don’t bring in a big haul. Gerard already owes money to a couple of crewmembers including the engineer (Ardalan Esmaili), a Syrian refugee who is clearly overqualified to handle odd-jobs on a fishing boat. When they first meet, Siobhán bluntly asks why he’s stuck in such a dead-end job, a question that highlights both her sheltered academic background and her lack of tact.

The skipper’s fishing plans are abruptly halted when the boat hits something underwater, trapping them in the middle of what appears to be empty sea. Slime begins to seep through the hull, dissolving strange little circles in the wood. One character optimistically theorizes that they’re created by some kind of giant barnacle. In fact, the ship has been caught by some previously-unseen creature from the depths of the ocean, and its slimy excretions contain a deadly parasite.

With coronavirus fresh on everyone’s minds, Sea Fever‘s conceit feels doubly effective at the moment. You’re far more aware of characters repeatedly touching their faces, risking parasitic infection. And as the drama ramps up, much of the conflict comes from people’s radically different responses to danger, ranging from denial to self-centered survivalism. Siobhán’s role is an interesting riff on a couple of familiar tropes: the neurodivergent academic, and the scientist as a Cassandra-like voice of reason, ignored in favor of superstition and paranoia. She’s a logical thinker and with no skill for casual socializing, but instead of mistaking this for a lack of compassion or emotion, the film portrays her as the moral center of the story. She wants everyone to be safe, including the rest of the population on land, who risk infection if the crew disembarks before eradicating the parasite. Meanwhile most of the other characters are either out for themselves, or don’t feel able to take charge of the situation.

A skillful combination of science fiction and psychological thriller, Sea Fever is elevated by Neasa Hardiman’s attention to detail. You can see how this could’ve been a less memorable movie, but Hardiman’s character choices really make it stand out, from the nuanced framing of Siobhán’s isolation on board the ship to the diverse casting overall. It’s not just international but multi-generational, including Olwen Fouéré as a crewmember in her sixties, a vanishingly rare sight in this kind of film. A more stereotypical version would place Siobhán on a boat full of grizzled white men, but stereotypes aren’t necessarily grounded in fact, and Sea Fever‘s cast ultimately makes for a more interesting story.

Sea Fever is now available on VOD, including Amazon Prime and Google Play.