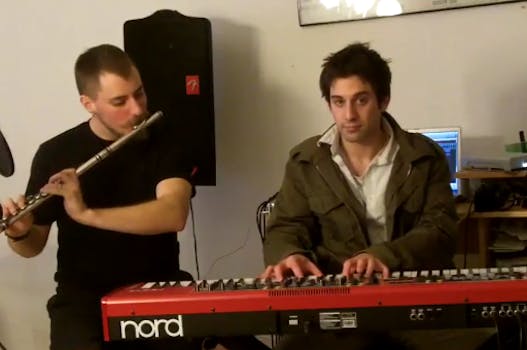 Although he makes his living as a jazz pianist and musical director in New York City, Scott Bradlee is no stranger to pop music.

The Astoria local is actually surprisingly up on some of the most widely circulated music among the teen- and tween-aged crowds, regularly posting remixes of those hits to his YouTube channel, which currently boasts 3,600 subscribers. Many of those fans flocked to his channel last November, when Bradlee and some friends got together to make A Motown Tribute to Nickelback, a cover of Nickelback’s “How You Remind Me” that earned over 230,000 views.

“I like taking songs that people assume to be bad and finding out if we can change the conditions and turn it into something that people like,” Bradlee told the Daily Dot.

Here are five of our favorites.

Bradlee and his cohorts step into the phone booth and emerge as Thomas Jefferson and His Ragtime Orchestra, a 1930s swing band wearing top hats and white wigs. Here, the quintet tries their hand at Weezer’s 2001 hit “Hashpipe,” giving it a slinky edge that runs on Nila Bertino’s lounge lizard croon.

With an assist from beatboxing flutist Greg Patillo, Bradlee mashes Biggie Smalls’s 1994 triumph “Big Poppa” with the “Hedwig’s Theme” from the Harry Potter franchise and creates one of the most clever rap remixes I’ve heard in some time. I may actually put this one on a mixtape.

4) Jersey Shore as a Silent Movie

OK, so not quite the same as a song remix, but this silent movie remake of MTV’s Jersey Shore will make you feel all sorts of different about Ronnie, Snooki, and The Situation. It’s almost enough to make that mile-a-minute Pauley D fist pump a classy thing.

5) Gotye’s “Somebody That I Used to Know”

Like we were going to get through a roundup of pop music remakes without paying attention to the biggest song of the spring? Bradlee gets a boost from multi-insturmentalist Ben Golder-Novick and drummer Allan Mednard on this rendition of the Gotye hit, which plays out with no vocals but does feature a tremendous saxophone solo towards the end.