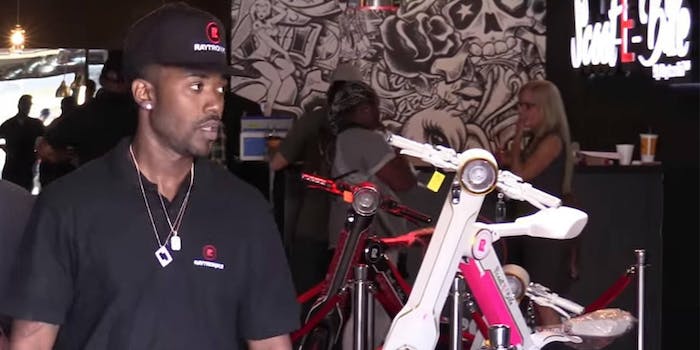 Screengrab via The Hollywood Fix/YouTube

Finally, something worse than hoverboards.

Forgettable rapper and reality star Ray J launched a new venture on April Fools’ Day with the opening of his Raytroniks store in Los Angeles. As raydiculous as the name may be, it’s a real-deal store on Melrose.

Ray J’s flagship product just happens to be an electric bike with one of the most laughable names on the planet. Here, let Diddy drop it for you:

Ray J even took to TMZ to show off the bikes at his brick-and-mortar store. Clad in a branded polo and baseball cap, Ray J turns the camera on the paparazzi and half-heartedly chases after people going on joyrides on the sidewalk.

Scoot-E-Bikes are available for purchase online and at Raytroniks. Though no horror stories have come from rides on the electric bike, Mashable points out that the Scoot-E-Bike offers pretty much no safety certifications and could very well burst into flames just like a hoverboard, except around your crotch. You can charge your phone on the bike so you’ll have full battery life when it does start to incinerate.