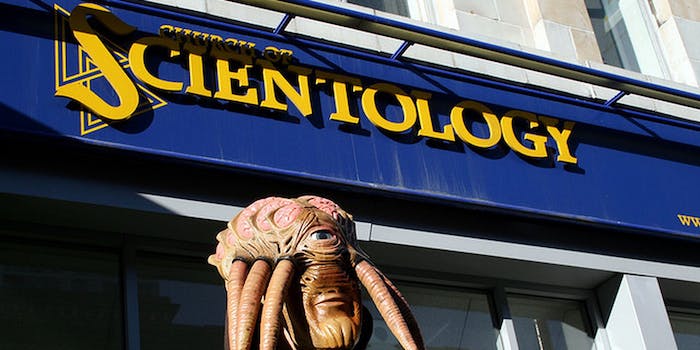 Did the Church of Scientology silence this “After Earth” parody?

There's no direct evidence, but the church is the only interested party with enough power, authority, and proclivity for stray censorship to go after the lo-fi spoof.

There are many possible explanations for why M. Night Shyamalan’s new film After Earth—starring Will and Jaden Smith stranded on a post-human Earth—flopped at the box office.

It might be for lack of realism (as Buzz Aldrin pointed out, “there was a lot of noise. In space you don’t get that much noise”). It might be the writing (“the script has no nuance, none,” wrote the LA Times”). Or as, the New York Times wondered, it could be that the film is a thin allegory for the teachings of Scientology.

After the film’s premiere, a parody video operating on that third assumption soon appeared at cheerupwillsmith.com. In it, two Sea Org members go to see After Earth. Along the way they collect praise for Smith as they attempt to cajole strangers into signing a billion-year contract with the church. “I really love the movie,” one joked. “Thanks Will Smith. And I’m being held captive by the Church of Scientology.“

The video was created by Jason Selvig of the Good Liars, the comedy duo responsible for the Time Warner Cable parody campaign that made news in April. It’s an innocuous and not exceptionally clever video. And mysteriously, the website has been taken down by GoDaddy.

“They said it was Copyright Infringement, Trademark Infringement, and False Identity,” Selvig told the Daily Dot. “The latter is fucking ridiculous if you could have seen the site.”

The obvious suspect behind the take down is the church itself. Of course, there’s no hard evidence for this. But its penchant for overreaction, its comic adherence to secrecy, and its kabal of Hollywood faithfuls (Will Smith, who wrote the story for After Earth, is himself a supporter) all conspire to make the church the only interested party with enough power, authority, and proclivity for stray censorship to go after the lo-fi spoof.

Indeed, in the video, when the two Sea Org imposters attempt to deliver the billion-year contracts they’ve collected to a local branch of the church, a representative threatens to call the police: “You’re impersonating our church,” the representative said. “If you don’t leave we’re going to call the cops.” He later added, “That is not our contract.”

Officially, the Church of Scientology denied any connection to the film, stating that “the myth launched by a handful of self-promoters that After Earth is about the Scientology religion and its tenets is silly nonsense.” The statement continued:

“Scientology is not alone in addressing unwanted emotions such as fear and this topic is hardly unique to any one religion when you consider overcoming fear has been a universal theme in stories for thousands of years as well central to countless film plots. For example, the dialogue ‘Fear is the path to the Dark Side. Fear leads to anger, anger leads to hate, hate leads to suffering’ using this same logic would seemingly make Star Wars Episode I: The Phantom Menace a ‘Scientology-themed movie.’ ”

And there is good reason to believe the church is sincere on this point, as no one would compare their own movie to The Phantom Menace.