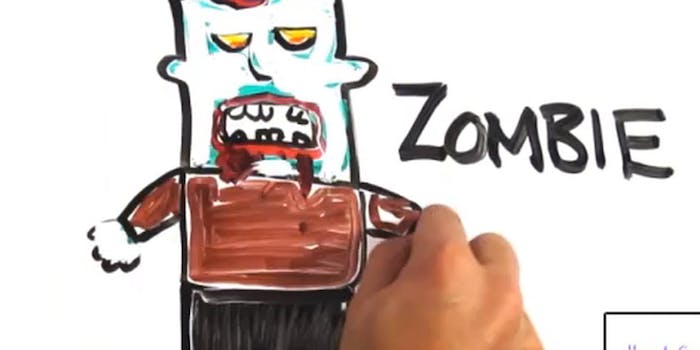 The real science behind a zombie apocalypse

YouTube's asapSCIENCE breaks down the type of virus it would take to create a real-life zombie apocalypse. The answer? Rabies.

Hurricane Sandy has half of the United States walking around like Frankenstein’s monster. At the same time, Joss Whedon believes that Mitt Romney’s leading us to a zombie apocalypse.

The world is once again infatuated with the undead, which means it’s probably time to start considering its reality.

Thanks to the kind Canadians at asapSCIENCE, concerned Americans from California to Kennebunkport can obtain an advanced knowledge concerning the likelihood that a horde of humans will suddenly turn into colony of zombies and “start wreaking havoc on society.”

And it turns out that a rehash of 28 Days Later is not all that likely.

“But a virus that induces zombie-like qualities,” asapSCIENCE’s Mitchell Moffitt amends,” like rage and the incessant need to eat human flesh? Hypothetically, yes.”

As he goes on to say, the main factor involved in creating this pseudo-zombie breakout is finding the virus specific to the brain areas for these symptoms while finding others intact. That virus is rabies.

Should rabies break through to the ventromedial hypothalamus (the region of your brain associated with hunger recognition), one could quickly change into a “super-hungry, aggressive, braindead being that can’t recognize family and friends or control their own actions other than to feed.”

And if that happens to 30 people, or, better yet, 300 (!), we’d have somewhat of a wild and crazy zombie outbreak on our hands.

Let’s just hope we’re all ready when that day comes.