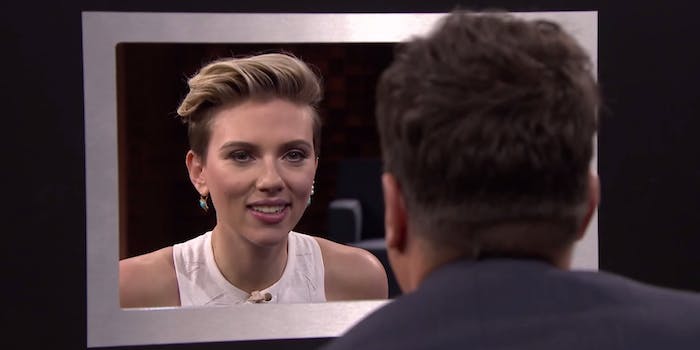 May the least giggly contestant win.

Black Widow is an expert at hiding her true motive, but when it comes to being able to lie under pressure, Scarlett Johansson—the actress who plays her—isn’t anywhere near as successful.

In “Box of Lies,” a segment on The Tonight Show, all semblance of common sense goes out the door as Johansson and Jimmy Fallon fib, lie, fake out, and fake out a fake out. The items they’re trying to describe (or not) are as weird as ever, leading Johansson to ask if something Fallon described was designed by Wiz Khalifa.

We already know Fallon has trouble keeping a straight face, but at this point we can only wonder if it’s just a giant ruse to snatch victory from his opponent. Or is Johansson’s inability to not laugh an equal ruse? Either way, don’t trust anyone when you’re playing a game against someone who’s played a spy.