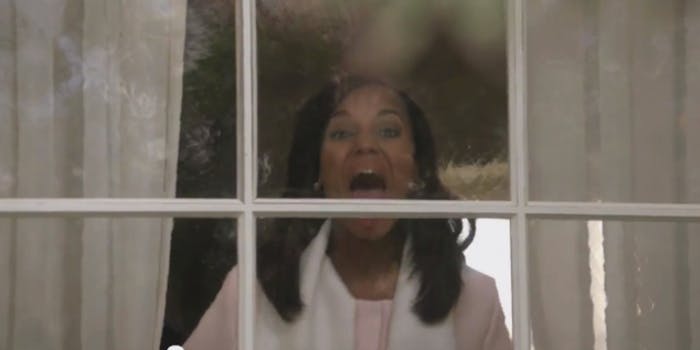 Let's look back at Fitz's dumb face one more time.

Full disclosure: I stopped watching Scandal at the end of season 2, because Olivia and Fitz’s relationship was causing veins to pop out of my neck, and staring at Fitz’s expressionless face was like staring at a bowl of cold oatmeal. I would throw my glass of red wine across the room in frustration every time she gave into him. (Then I would quickly wipe up that wine and wring out the paper towel in my mouth, like a monster.)

This is what Scandal did to me, but elsewhere it became a Twitter phenomenon, and season 3 especially was discussed and dissected there. Last night’s season finale was the apex of the Internet’s love/hate-watching. I’m not alone in my Fitz-tration.

I even hate Fitz’s face when he’s consoling ppl. This is real.

Even Olivia Pope herself stepped in last night to educate her Gladiators:

Uhm #Gladiators if you do not know the YOUNG GIFTED & BLACK reference, please look it up! #LorraineHansberry #ScandalFinale

To quote a fellow coworker, Scandal is “the TV equivalent of eating a bag of Cheetos now. It’s not good and no one really likes it but man, sometimes you need a bag of Cheetos.” This could be said about a lot of television these days, but Scandal lent itself exquisitely to binge-watching. Even FLOTUS binge-watched. For all the hate-watching, it’s an important show that got people—women especially—talking about the dynamics of women in power.

After the finale, creator Shonda Rhimes appeared on Jimmy Kimmel’s special, “Behind the Scandalabra,” to talk about the writer’s room and cast. Kimmel also offered some bloopers from the set. Bellamy Young’s line flubs might be the highlight; they often include exasperated declarations of F-bombs (fart, fuck). Also, there’s that one part where Fitz’s voice cracks, revealing the widdle boy we’ve always known he was! (I’m sure Tony Goldwyn is a very nice person.)