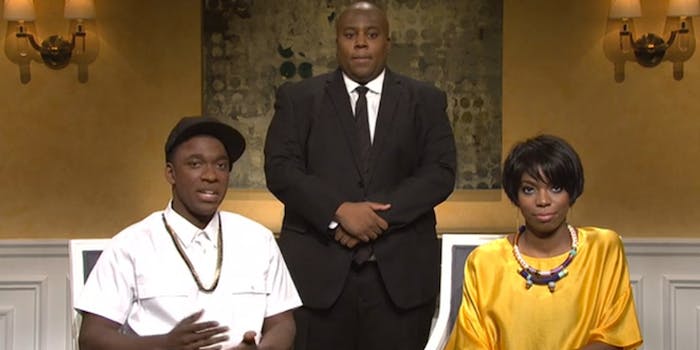 Of course Queen B appears.

Last night, Saturday Night Live’s cold open tackled one of the week’s most pressing stories: The Jay Z/Solange elevator fight seen (but not heard) ‘round the world.

Sasheer Zamata and Jay Pharoah played Solange and Jay Z, and of course there was an appearance from Beyoncé, in the form of Maya Rudolph. Their elevator fight “reenactment” was funny, though not quite as funny as SNL’s recent Beygency sketch, but I will watch Rudolph’s Beyoncé impression forever.

While the sketch did a good job satirizing the way the media fabricated narratives for this story, and the celebrity culture of damage control, many people on Twitter also pointed out that this was the first time in years that four black cast members had been in the same sketch at the same time.

It’s also a reminder the world needs more Sasheer Zamata. This sketch she did for SNL’s Above Average channel is funnier than a lot of the material the show’s been producing lately.