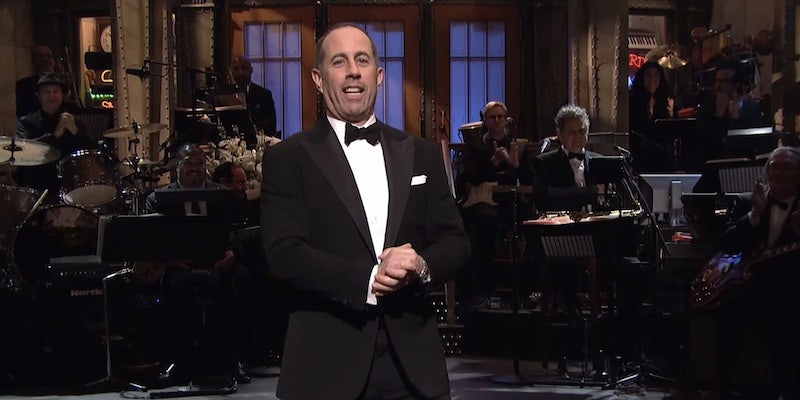 Imagine standing on top of camera one in Studio 8H during a 'Saturday Night Live' taping.

Imagine standing on top of camera one in Studio 8H during a Saturday Night Live taping. That bird’s-eye-view position is now possible, at least for one evening of SNL, thanks to the virtual-reality initiative around the show’s 40th anniversary event.

Virtual reality headsets might be the domain of video games (and pornography) in most people’s minds, but they’re also opening up new styles of content consumption that build off the established genres of TV and film. For the Feb. 15 event, which brought back cast members and notable hosts and celebrities from across the history of the sketch show, NBCUniversal mounted a 360-degree camera in an unobtrusive location and documented the night in a whole new way.

“It really started when I found out from the SNL producers what the show was going to be and who was going to be there,” explained NBCUniversal’s VP of Late Night Digital Entertainment Michael Scogin. “This is a moment in time and a moment in history. This may never happen again, so why not try to capture it this way? Most people will never get to go to Studio 8H. You experience that place in a way you can’t do on a regular, flat television screen.”

With a Samsung Gear headset on, you can watch the scene taking place in front of you, look down to check out some of the crew working underfoot, look back and watch the audience, or even peek up at the lights overhead. Currently there are two experiences users can view: Jerry Seinfeld’s audience Q&A, and the Celebrity Jeopardy clip. In the Q&A, as Seinfeld calls out particular audience members, you don’t have to wait for a camera to cut to them. You just turn you head and can watch Taylor Swift sitting next to Sarah Palin for as long as you desire. In fact, it’s sort of more fun to turn and watch the audience, famous or not, as they watch the action on stage. Especially since, as Scogin relates, they weren’t aware of the 360-degree filming, although some have now seen the clips.

“Norm MacDonald was completely blown away,” Scogin said. “All the show producers and Lorne Michaels have seen it. It’s really interesting to see someone involved with the show and how they experience it versus someone in the public. Just to see the reaction from the public was pretty amazing. I think a lot of people have heard about virtual reality and might have seen the Oculus Rift demo, and maybe thought of it as a CGI or video game peripheral. I think this really goes beyond that and shows people. They have a great point of references because they saw it on TV but didn’t experience it like that. This has the power to bring you to a place, physically and emotionally, in a way flat TV can’t.”

To create the experience, SNL and NBC partnered with Chris Milk and VRSE, who debuted the first VR film at Sundance this year.

“The technology serves a creative vision,” said Scogin. “They built an app that works on Samsung Gear VR and Google Cardboard. But it also works as a 360 experience as well. That was pretty important, because this is a brand new technology and not a lot of people have it. Anyone with an iOS or Android phone can experience that 360.”

There’s still more material to come from the 40th Anniversary special, and although Scogin says they’re not about to start making every SNL episode in VR, they’re hopeful that they can do more original content written and produced specifically for VR in the future, especially in the digital shorts realm.

“That’s definitely something we’ve been discussing,” he said. “I think it’s a great challenge to SNL and the writers. How do you write it with this in mind? A lot of the techniques of television and film are out the window, with framing and quick edits. I’m really happy SNL and Lorne Michaels and NBC let us play around in this. We learned a lot.”