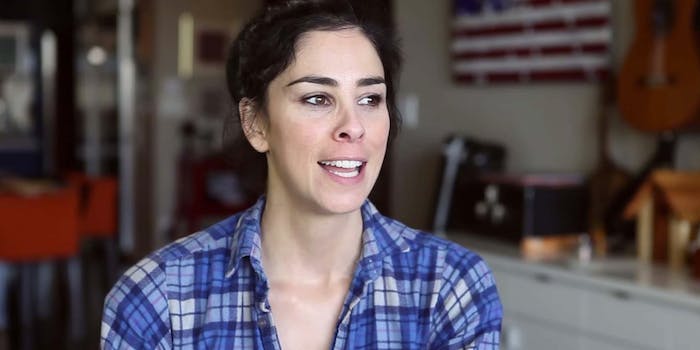 He says it wasn't a gender gap but a 'talent gap.'

Last October, Sarah Silverman did a controversial spot for the Equal Payback Project in which she discussed the wage gap between men and women and presented the “vagina tax” as a way to calculate that disparity. She recently did another spot for networking site Levo and got a little more personal on the topic of income disparity.

In the clip, which is part of Levo’s #ask4more campaign, Silverman discusses opening for fellow comedian Todd Barry at the Broadway Comedy Club, where they both did back-to-back 15-minute sets. She claims she was already well-known at this point, but that after the show, she got paid $10 while Barry got $60. She asked club owner Al Martin why she got less, and she claims he feigned ignorance.

Since the clip was released April 6, it’s circulated quite a bit online. Martin’s one of the people who saw it, and he responded to her claim with his own video. He says the content of her claim was “absolutely false,” explaining that she was a “guest spot” that night: The show in question, which happened 15 years ago, only had Barry booked that night; Silverman jumped on the guest spot, which was offered to her so she could work out material. Martin says after Silverman confronted him, he felt bad and gave her cab fare, but that he didn’t purposely underpay her.

“It’s not a gender gap,” he says in the video, “although I think it’s a noble cause. But at the time it was a talent gap.” He goes on to add that he, a husband and father of three daughters, wants equal pay for women, “but don’t make me your doormat in this cause, because it isn’t true.”

Reddit of course had opinions about the issue: Commenters debated the purpose of comedy club guest spots, weighed Silverman’s level of fame at the time versus Barry’s, and used this opportunity to drop in Christopher Hitchens’ dated argument that women still aren’t funny.

Silverman has not yet publicly responded to Martin’s video. Hopefully this doesn’t take away from what Levo is actually attempting to highlight with the #ask4more campaign: In 2015, the wage gap is still a glaring issue, which Kristen Schaal so gracefully illustrated on The Daily Show last month.