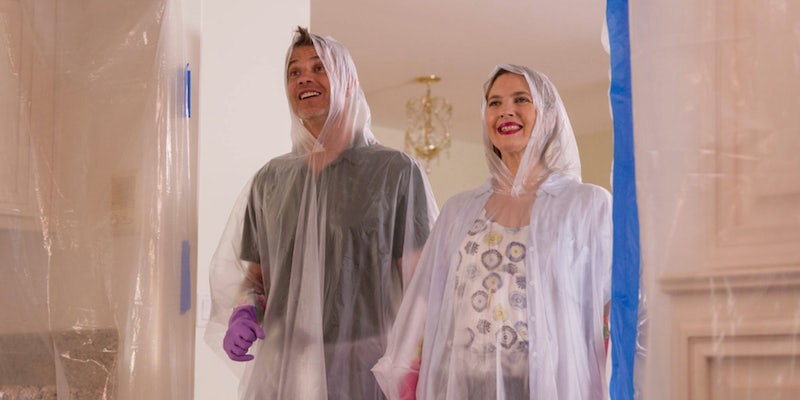 ‘Santa Clarita Diet’ gets off to a promising start, then kind of dies

The Netflix series has guts, but it needs plot.

Early in Santa Clarita Diet, Drew Barrymore’s character Sheila has a revelatory moment: When life is telling you “this is your new truth,” you have to embrace it.

That new truth involves a firehose of projectile vomit and Sheila suddenly needing a different diet to survive, which pivots the trendily titled Netflix series from cookie-cutter suburban comedy to familial farce. The 10-episode series, created by Victor Fresco (Better Off Ted, My Name Is Earl), focuses on Sheila and her husband Joel (Timothy Olyphant), two realtors living in relative comfort in Santa Clarita, California, with their teenage daughter, Abby (Liv Hewson).

In the pilot, we get a glimpse of the mysterious green smoothie Sheila’s making, which seems to be filling a hole in her life. Quickly, that smoothie paints the walls, mirrors, and floors of a house she and Joel are showing; Sheila vomits so audibly the potential buyers leave (it’s the first gross-out moment we’ll see), but then she starts to change.

This is Barrymore’s first lead TV role, and she fully embraces Sheila’s new sense of empowerment. Barrymore said in a recent New York Times interview that she was having a personal crisis when the series started shooting, and wanted to have a “parallel” awakening with Sheila. There’s a hint of subtext in the show about how women have to be so many things to so many people, but it’s never fully explored.

The show is also about a marriage—albeit one between two white, affluent suburb-dwellers—but it takes a unique way in. Joel and Sheila’s relationship is improved by her change of life; they’re collaborating now, even if it is on murdering randos. The chemistry between Joel and Sheila feels genuine, even if their joke delivery style gets kind of redundant. Abby holds together a subplot with a next-door neighbor’s son (Skyler Gisondo) that’s often more interesting than what’s happening with the dysfunctional adults. She gets some of the best jokes and it’s shame she doesn’t get more of a plot.

Early promo for the show didn’t obscure the fact that Sheila’s “diet” includes flesh, but it framed it more as a weight-loss commercial, complete with testimonials. Netflix likely knew that screaming, “LOL mom’s a zom!” would turn some people off. It’s an oversaturated genre. However, it hasn’t stopped the series from being labeled a “zom-com” and “meat-cute.”

Santa Clarita Diet doesn’t really have any of the hallmarks of a zombie film, but halfway through the series, we still don’t have an idea of what happened to Sheila, and she and Joel fall into a tired pattern of kill-fret-kill. Joel starts to investigate a possible connection, but that storyline is dropped until the last two episodes, then folded into a family-is-important coda. By the end, we don’t really have any new truth to embrace.