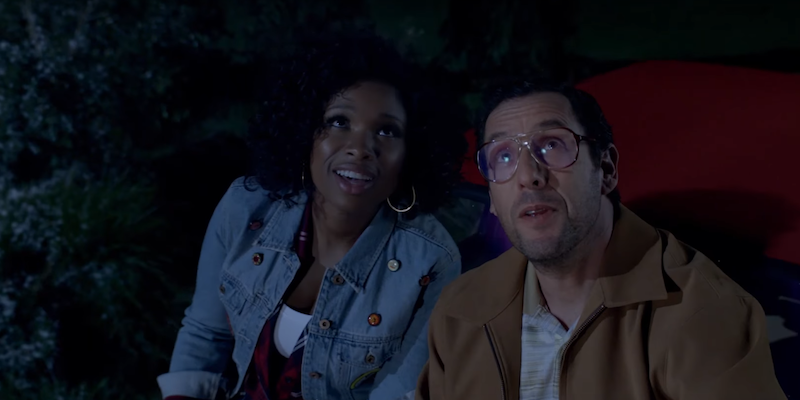 Adam Sandler’s ‘Sandy Wexler’ is short on laughs, and long on runtime

Sandler’s die-hard fans will return for 'Sandy Wexler' regardless of how brutal the reviews get. But should you put it on your Netflix queue?

Three films into Adam Sandler’s ongoing collaboration with Netflix, we’ve seen him headline a goofy Western parody (The Ridiculous 6) and a buddy action-comedy (The Do-Over). For round three, the SNL alum is Sandy Wexler, a small-time talent manager pounding the pavement of mid-’90s Hollywood.

Unfortunately, his stable of clients is less “superstar” and more “dive bar.” If you need a puppet act or an incompetent daredevil, Sandy Wexler is your man. That all changes when he discovers Courtney Clarke (Jennifer Hudson), a talented singer stuck working at an amusement park. Even Sandy would have a hard time screwing this opportunity up, but he finds a way once he starts to develop feelings for her. Sandy has to decide whether to tell Courtney the truth, or the thing he thinks she wants to hear.

Sandler’s base of die-hard fans will likely return for Sandy Wexler regardless of how brutal the reviews get. His haters would never click “play” in the first place. So, what about the undecideds and the fence-sitters? For those who can take Sandler or leave him, should this Happy Madison outing be streamed?

Sandy Wexler finds Sandler in full-on “silly character” mode once again. This is a subset of Sandler’s career that includes flicks like Jack and Jill and Little Nicky, so that may be red flag enough for many. But even for fans of this brand of Sandler, there just isn’t much there when it comes to the character. He lies a lot, he talks in a funny voice, and he has an abrasive, forced laugh that he does constantly. That’s literally the whole schtick when it comes to Sandy Wexler.

At best, he’s mildly amusing until you realize there’s nothing more to him, and upon this foundation Sandler and company have built 131 minutes’ worth of movie. That’s only a half hour shorter than Avatar. Even when Sandy Wexler works, that runtime is a beating.

But there’s an even bigger problem when it comes to the film’s underlying love story. Sandler and Hudson do have some on-screen chemistry, but it’s not the chemistry needed to make this story work. You can understand why Courtney would be fond of Sandy, and loyal to him, and want to help pick him up when he’s down. But falling in love with him? Not unless there’s a genie or love potion that got left on the cutting-room floor.

Hudson gives it her all, but this is very much a case of two characters going through the motions of romance because that’s what the script needs them to do. It never once feels natural or earned. It’s like the “mega-happy ending” Wayne’s World riffed on back in the day, except without the self-awareness. If Wexler had been less of a caricature… well, this romance probably still wouldn’t have worked, but as it is, it’s just laughable. Except not in a way that will actually make you laugh.

Sandy Wexler does have some funny moments, however. It’s just that most of them don’t involve the title character. Nick Swardson’s ill-fated daredevil may make you wish you were watching a movie about him instead, and Terry Crews is great fun as a professional wrestler named “Bedtime” Bobby Barnes. If nothing else, viewers can make a game of trying to guess which familiar face will show up on-screen next. There are tons of them, ranging from Judd Apatow to Vanilla Ice. We won’t spoil the best cameo, but the scene that reveals the identity of Sandy’s former client “Alfred” is easily the best of the movie.

Sandy Wexler gives us a romance that isn’t believable, involving a character who isn’t funny, in a film that still wouldn’t have worked even if they had shaved 45 minutes off it. But that would have been a good start.