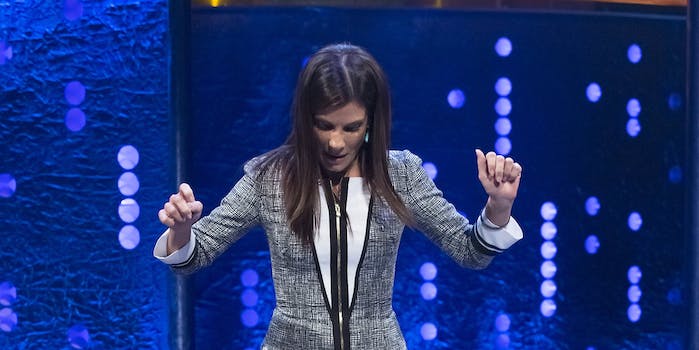 Sandra Bullock and Tom Hanks have some hidden talents.

Sandra Bullock and Tom Hanks may each be having a banner day at the box office, but their real win this week came earlier this week on the Jonathan Ross Show, when they rapped, played, and danced their way into the hearts of the entire Internet.

Bullock rapped the Sugarhill Gang’s classic “Rapper’s Delight” in a surprise performance that was, well, a delight. Then Hanks, with help from Ross and Bullock, treated us all to a reprise of his 25-year-old iconic floor piano scene from Big.

“The sad part is I learned the words because I liked this guy in high school,” Bullock confessed. As befits Bullock’s romcom-heavy career, she then delivered a perfect full verse of the 1979 hip-hop anthem to a thrilled audience, including Hanks.

“Sadly, it worked,” she added, about her ploy to get the guy. Oh, Sandy. Of course it did.

But the night was a shared triumph. Hanks took the stage and faced down his old nemesis, the famous floor piano from the F.A.O. Schwartz toy store. Hanks proved game and nimble for the task, but even he faltered when Bullock offered to dance chopsticks in her razor-thin stilettos. Check out Bullock’s chopsticks victory salute at 2:00.

It’s clear that her real gift, along with Hanks, is charm. After all, the Internet has made it both easier and harder to hold your personality up to millions of fans. These days celebrities are less stars in the grand Hollywood firmament and more like, well, people who embarrass themselves on YouTube while we all watch.

And sometimes, that’s a beautiful thing.