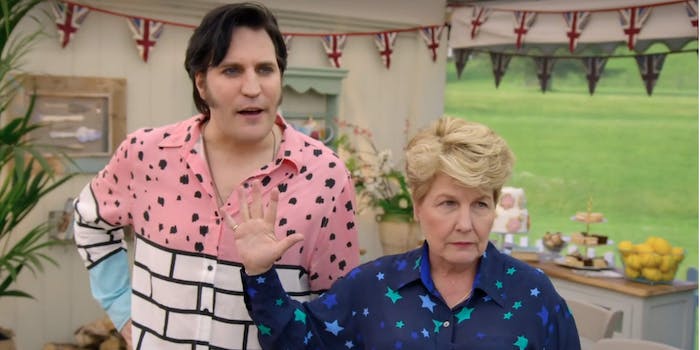 Sandi Toksvig is departing ‘The Great British Bake Off’

The beloved co-host of 'The Great British Bake Off' is moving on.

Sandi Toksvig, one of the hosts of The Great British Bake Off, is leaving the show after three years.

Toksvig was brought on as host along with Noel Fielding after the departure of Sue Perkins and Mel Giedroyc and hosted three seasons of the series, which was re-christened The Great British Baking Show for its arrival on Netflix. In a statement, Toksvig said she’s moving on to other projects, adding:

As my waistline will testify, Bake Off is an all-consuming show. Spending time with Prue, Paul, and Noel has been one of the great pleasures of my life. These are friendships which I know will continue beyond the confines of television. Bake Off is a wonderful programme which has already proved it can happily withstand a change of hosting personnel. The reason for that, of course, is that the true stars of the show are the bakers themselves. I wish everyone well.

The show is searching for a replacement, who “must have experience of mopping up spills and the occasional tear.”

Toksvig will reportedly appear in The Great Stand Up to Cancer Bake Off sometime this year.

All pud things come to an end. The upcoming series of The Great Stand Up To Cancer Bake Off will mark the end of Sandi’s magnificent stint as a presenter on the show. We would like to thank her for all the wonderful memories and wish her the very best for the future. #GBBO pic.twitter.com/aEnEu00fqu

Fans took the news in stride, but there were also some ideas for her replacement.

The only person I want to replace Sandi Toksvig on #GBBO is @RichardAyoade pic.twitter.com/8v5pMK6tHU

Made the Tom Cruise Laughing meme but with Sandi Toksvig in it instead. Enjoy and use wisely. #Tomsvig pic.twitter.com/jhH6xjWicb