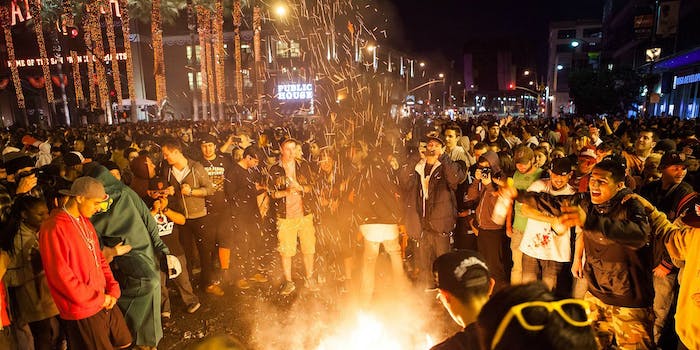 For the third time in five years, the San Francisco Giants are World Series champs. Thank Madison Bumgarner for this one.

San Francisco outlasted the Kansas City Royals 3-2 Wednesday night, on the road in Game 7. The Giants and Royals each put up two runs in the second inning, and Michael Morse drove in what would be the game-winning single two innings later. It’s San Francisco’s eighth total World Series title.

But the day’s sports chatter revolved around what the team would do with Bumgarner, who had already carried the Giants with two winning starts during the series. Wednesday he pitched in relief on only two days’ rest, and closed the tab on the Royals for five scoreless innings.

Bumgarner finished the World Series allowing one run in 21 innings. In the end, Bumgarner was on the mound for a third of San Francisco’s 63 World Series innings. He was an easy call for series MVP, where he was also awarded “technology and stuff.”

The performance was apparently transcendent enough for the Associated Press to tweet out a commemorative Jockey ad.

Advertisement: Madison “#MadBum” Bumgarner was born for greatness, and judging by his nickname, @Jockey ads. pic.twitter.com/krxCP5QCXt

Predictably, the championship riots seem to be in full swing around the Bay Area.

There’s a guy with a torch desperately trying to light a couch on fire while the crowd chants “Burn it! Burn it!” pic.twitter.com/zUrBnK62D2

Photo via Shawn Clover/Flickr (CC BY 2.0)