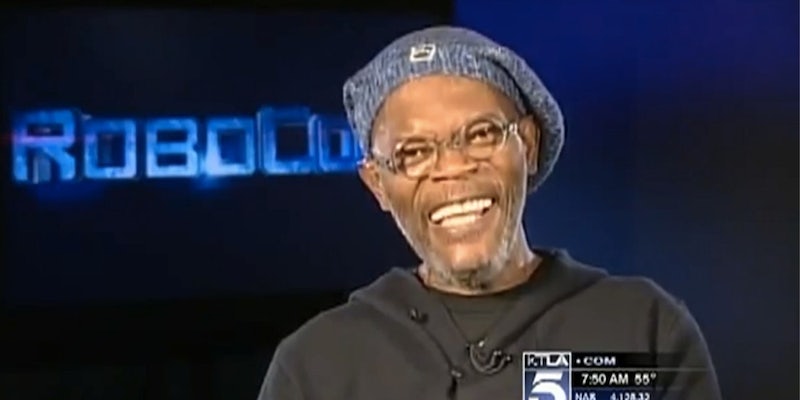 “You’re as crazy as the people on Twitter,” Jackson says. “I’m not Laurence Fishburne. We don’t all look alike!”

Jackson was on KTLA to promote the new RoboCop movie, and Rubin starts off by asking him about the reaction to his Super Bowl commercial. Jackson looks confused, probably since he wasn’t in a Super Bowl commercial, but Laurence Fishburne was. You can see Jackson’s facial expression change, and you know Rubin’s about to get a SLJ-style verbal beatdown.

“You’re as crazy as the people on Twitter,” Jackson says. “I’m not Laurence Fishburne. We don’t all look alike!”

When Rubin attempts to pull his foot on out his mouth and ask about RoboCop, Jackson gives him a swift “Oh hell no!” He then gives Rubin a rundown of all the black men currently in commercials, just in case he gets confused again.

Rubin later offered an official apology, stating that he was actually referencing a Captain America: The Winter Soldier promo during the Super Bowl, but once Jackson called him out, he went with it:

“I pride myself on the fact — that unlike a lot of people who do this kind of work — more often than not, I really do know what I’m talking about. But I didn’t 30 minutes ago, and I’m really embarrassed about it, and I very much apologize to Samuel L. Jackson and anyone else who was offended for what was a very amateur mistake.”