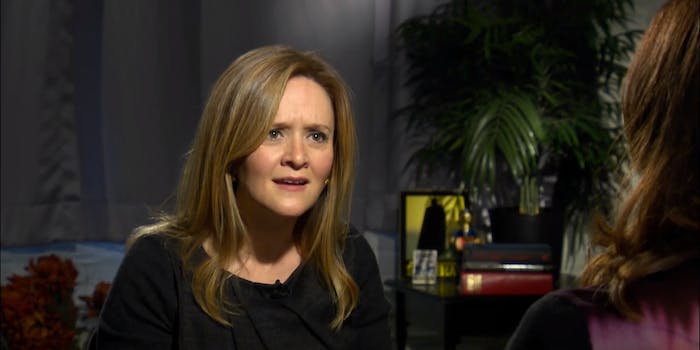 ‘Daily Show’ correspondent Samantha Bee gets her own show on TBS

She's the third correspondent to announce a departure in the past month.

Longtime correspondent Samantha Bee is leaving The Daily Show after 12 years to star in a TBS comedy, making her the third member of the cast to announce a departure in the past month starting with Jon Stewart’s planned retirement.

But she’s not leaving for the TBS comedy for which Jason Jones, a fellow Daily Show correspondent and her husband, is leaving (although she will be producing it); she’ll be getting her own TV show. It’s in the early stages of development and is being set up as “a platform for Bee to apply her smart and satirical point of view to current and relevant issues.”

Both Bee and Jones will be executive producers, making this another family affair.

“We’re thrilled to have Sam join Jason at TBS and really make this a family affair. We actually have their kids coming in next week to pitch us animation,” Brett Weitz, executive vice president of original programming for TBS, said in a statement. “Like her fans around the country, we absolutely adore everything about Sam, from her straight-faced sarcasm and ruthless wit to her uncanny ability to mine comedy gold from just about any awkward situation. After watching Sam’s work for years, we knew that her distinctive humor and talent belong at the front of her own show.”

Bee has yet to publicly comment on her departure from The Daily Show, but she did hint that something big was about to happen.

Lord thundering Jesus this day is about to get exciting.

Bee was the longest-running correspondent on the show prior to her announcement, so to mark her departure we’ve gathered some of her best clips.

A dive into why Republicans’ issues with Medicare and women’s contraception led Bee to discovering something even bigger that not many people may have realized: the fact that penis pumps were covered under Medicare.

One of the companies whose product has been linked to cancer launched a breast cancer campaign, which allows Bee to take the issue of “pinkwashing” head-on.

The Daily Show excels at letting people make themselves look bad, and as she reported from the Republican National Convention back in 2012, she learned about how the policies would help pretty much everyone—unless you had a uterus, that is.

Sarah Palin was announced as John McCain’s running mate in 2008, and Bee’s portrayal of how McCain treated female voters was spot-on.

5) The audacity of grope

Just last week she stepped up and showed us how far Vice President Joe Biden’s creepiness toward women went.