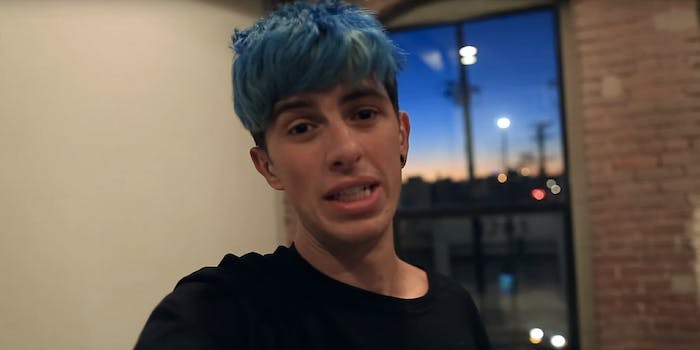 Sam Pepper returns to the spotlight with controversial murder prank

The YouTube community is not reacting well to Pepper's latest video.

Pepper, who was accused of sexual assault and harassment in 2014 after a video of him pinching women’s butts as a prank caught mainstream attention, has been quietly making video content ever since, but he announced his return to weekly video content with a newly controversial video where he “pranks” someone into believing they watched someone they care about get shot.

“Let’s see how he reacts to his best friend of five years being killed in front of him,” asks Pepper in the video’s introduction, which features Vine stars and best friends Sam Golbach and Colby Brock. When their car allegedly stalls out in an abandoned alley, a masked man grabs Golbach and covers his head with a bag and masking tape while Brock, who is in on the prank, sneaks off. They put Golbach in the trunk and drive him to a second location, where a masked Pepper pretends to shoot Brock in the head in front of Golbach.

Warning, the video is graphic.

The YouTube community has reacted negatively to the prank.

.@sampepper Disgusted + outraged by this video and it's concept. It's twisted anyway but in light of recent world events it's Just.So.Wrong.

Just watched that Sam Pepper video and I am truly disgusted… You just don't joke about things like that? Sort yourself out you helmet😡

Sam Pepper is a joke

"I was hated because of sexual harassment, but I'm sure everyone will love assault and kidnapping!"

It's good ppl are calling out Sam Pepper for his "prank" vid but I hope they know that's just the tip of the iceberg. He's done much worse.

Meanwhile, Pepper is only acknowledging the positive responses, and promising a return to weekly videos starting after Christmas. For his part, Golbach spoke out on Twitter about the experience, saying that it made his friendship with Brock stronger and that he hopes fan can see “the message behind this video.”

There’s a chance that the whole thing was a setup, and Golbach is just a great actor, since the final scene is well lit and with an obvious camera, although if he actually believed himself to be kidnapped, he may not have noticed. With YouTube’s “social experiment” problem, it’s hard to decide if Pepper and Brock pranking an unsuspecting Golbach is better or worse than the trio of them producing a fake prank meant to shock.  We might find out soon, as Golbach and Brock offered on their Twitter that they’d be “explaining some things” today.