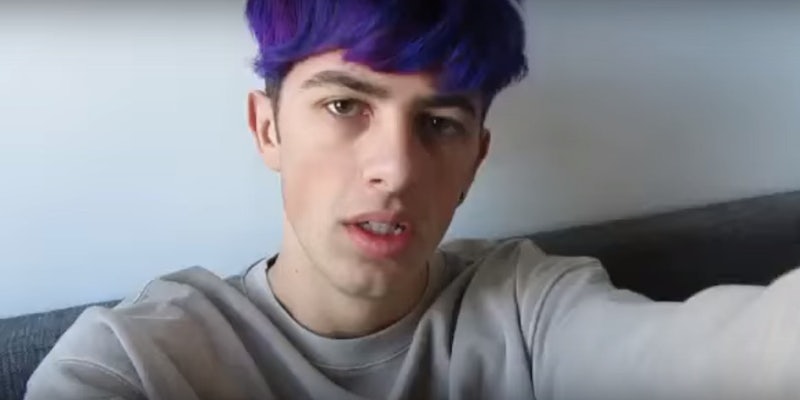 Could the prankster be pranking the ’net with this deletion?

Sam Pepper is no longer on the Internet.

The YouTube prankster who’s come under fire in the last year and a half for sexual misconduct in both his videos and personal life, announced his departure by making most of his social media presence invisible.

On YouTube, where even after the backlash he boasts 2.3 million subscribers, his channel now reads zero videos. However, he still registers a view count of 203 million, meaning those videos were made private, not fully deleted. On Twitter he’s deleted all his communication on the platform save for one tweet from February 21, reading, “I give up”

He did the same on Instagram, leaving only a black square with the same text.

The only major platform that Pepper seems to have left untouched is his Tumblr, which primarily shares photographs.

In September 2014 Pepper published a video that showed him pinching unsuspecting girls in what he called a “social experiment.” The fallout from the video included an outcry from his fellow vloggers about sexual misconduct, Pepper losing his multichannel network and ability to monetize his content as a YouTube Partner, and multiple rape accusations.

Pepper has stepped back from his video account previously, but he always returned with new videos. Most recently in November he stirred up headlines with a “murder prank” in which one friend pranked another by staging a dual kidnapping and led the prankee to believe he’d witnessed his best friend’s murder. In December Pepper launched a GoFundMe asking for donations of $1.5 million, saying he’d quit the internet for good. The page was removed from the crowdfunding site and Pepper abandoned the project.

We reached out to Pepper for further information on this deletion and will update this story with any additional info.

Update 6:03pm CT, Feb. 23: Just two days after Pepper deleted the content from his accounts, he tweeted an image on Tuesday promising to upload “the truth” on Wednesday, Feb. 24.

The image has led those following Pepper’s antics to believe this is another stunt or “social experiment.” KEEMSTAR, the YouTuber who runs DramaAlert, a channel dedicated to YouTube star beefs, tweeted that he’ll have an exclusive interview on Wednesday as well.