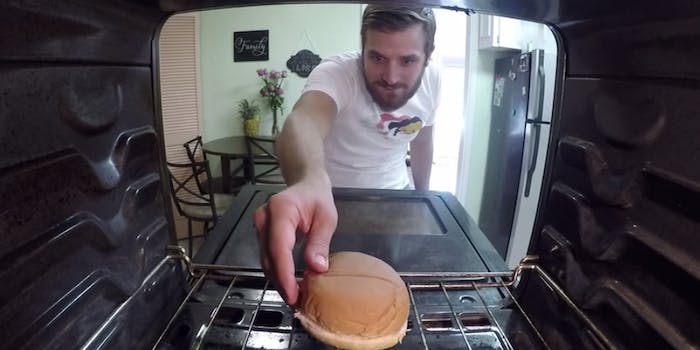 Sam and Nia have another bun in the oven. Literally.

They’re back, they’re pregnant, and they can’t resist another viral video.

Just two months ago, Sam and Nia Rader went viral when Sam tried to surprise Nia with her own pregnancy by testing her stolen pee. After the video gained attention, they subsequently announced their miscarriage. With a flurry of negative attention following them, including an incident where Sam was kicked out of a vlogger festival for threatening another attendee, the family claimed to be taking a YouTube break.

They returned only a few weeks later, and have now announced another pregnancy, this time by hiding a hamburger bun in the oven and having their mothers open the door to be surprised (and have their reactions captured by well-placed cameras).

This round of videos is much more typical of the pregnancy announcement genre, and thankfully involves no stolen pee. However, it has not garnered the same attention as their original announcement did, and in a recent video, Nia promises the family is ready to speak more about what they went through.

“Sam and I feel ready to be a little more transparent with you guys,” Nia said in the clip. “We feel like we have a story to tell, and if anything we have just convictions from God to share with other people and other couples out there who have been in any kind of situation like we were publicly put in recently.”

They’ve already followed up the bun-in-the-oven video with another video surprising friends with their baby news.