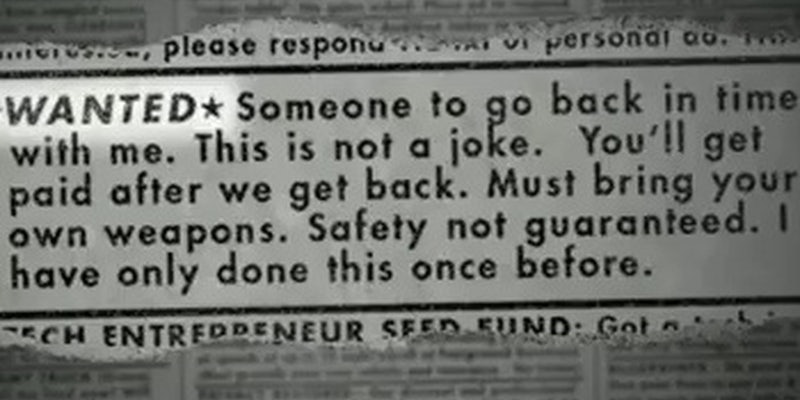 “Safety Not Guaranteed” meme becomes a movie—minus one mullet

The eponymous movie is receiving good reviews from critics, but online audiences aren't so pleased.

Memes are becoming movies. Is the Internet still in Kansas anymore?

“Wanted: Someone to go back in time with me. This is not a joke. You’ll get paid after we get back. Must bring your own weapons. Safety not guaranteed.”

That was the text of a wanted ad posted in The Copenhagen Post in 2005, which shortly spread across the world thanks to its popularity online. After becoming a meme with the prompting of YTMND, that want ad is now the premise of a movie.

Premiering nationwide on June 8, Safety Not Guaranteed stars among others Aubrey Plaza (April Ludgate from Parks and Recreation) and Jake Johnson (Nick Miller from New Girl), as they track down the poster of the “Safety not guaranteed” wanted ad for a magazine story. Romantic shenanigans ensue.

“Safety Not Guaranteed” received good reviews at its Sundance premiere—surprising for
for a movie inspired by a meme. Variety called it a “small movie with a big heart, and a “sci-fi-tinged oddball comedy about love.” The Hollywood Reporter described the script as “funny” and “fine,” and the The Salt Lake Tribune wrote the “cheerfully comic romance … starts with cynicism and ends up somewhere else entirely.”

Redditors, who discovered the trailer again today, seem excited about the film, but also a little bit irked. Many were left wondering why the movie deviated from the meme—the poster ought to be boasting a proud blond mullet, they observed.

“HE NEEDS TO HAVE A MULLET,” wrote Gyper on Reddit. “YOU ARE DOING IT WRONG DAMN IT!”

“This is awful,” opined teratophobia  on YouTube. “When I clicked on this trailer, I wanted camp. I wanted ‘Push It to the Limit.’ I wanted mullets to the floor and balls to the wall. What I got was a QUIRKY ROMANCE ABOUT LOVE AND REDEMPTION LOL XD SO RANDOM. This is one I will not be seeing.”

Meanwhile, the real writer of the original “Safety Guaranteed” wanted ad has yet to be identified. A documentary idea, any one?