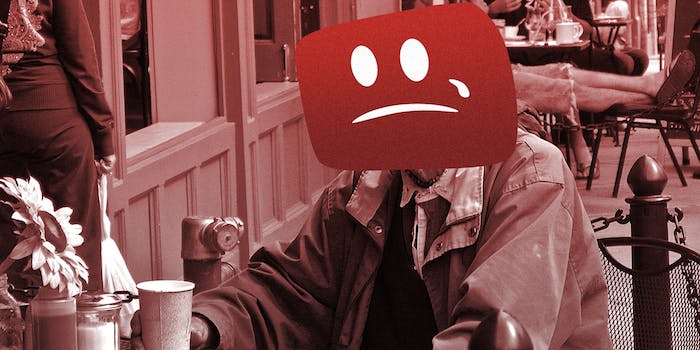 Do read the comments.

A few months ago, I was deep in a YouTube music-video rabbit hole, absentmindedly wading into a ’60s soul tide after initially trying to find a Lauryn Hill song. Among the comments on the Flamingos’ “I Only Have Eyes for You” claiming a certain movie brought them there was one that made me stop scrolling.

There were other personal remembrances of relationships and friendships past, but that particular comment got me in the gills, perhaps because comments that outwardly human are hard to come by these days.

“Don’t read the comments” has become one of the Internet’s favorite refrains, a shorthand for holding on to your sanity. This advice is especially helpful on YouTube, where comment sections are co-opted and devolve into self-serving performances. Scrolling down into this hellscape often requires that you have a life preserver.

But sometimes, the comment section does exhibit a humanity worth exploring, a thread that connects personal histories, memories, and heartbreaks. That’s where Sad YouTube comes in.

Created in 2012 by Montreal filmmaker Mark Slutsky, Sad YouTube is a collection of comments cherrypicked from videos that recount either a time and place buried in the past or some emotional reaction. Slutsky says that’s important.

“Like most people, I always kind of accepted the conventional wisdom that the comments on YouTube are basically the worst form of communication on the Internet,” he said. “Stupid, racist, full of tail-chasing arguments. And though most of them are like that, I started to notice another breed of comment that would pop up, usually on YouTube videos of old songs, or bootleg uploads of old songs. People would start sharing memories.

“I thought it would be a shame if they disappeared and got pushed down to page 75 of the comments.”

Slutsky viewed these honest, detailed, often misspelled comments as a new kind of oral history, and he started compiling them. You’ll quickly notice the videos featured on Sad YouTube are all music videos, spanning half a century’s worth of songs.

“I really think music evokes memory in a really interesting way,” Slutsky said. “Maybe older people are surfing on YouTube and following the suggested links and they’ll come across a song they haven’t heard in 10, 20, 30, 40 years. That moment of hearing that song again evokes a memory they might not have known they had, a story they might not have thought about for decades.”

Often, the comments relate to family or lost loves. From Blur’s “Sing”:

Some are obscure markers that mean something to one or two people. From Michael McDonald’s “I Keep Forgettin’”:

Then there are the detailed remembrances of where people were when we heard the song. From Electric Light Orchestra’s “Livin’ Thing”:

Common themes include death, murder, or military service, and many of the songs featured are from the ’50s or ’60s. Slutsky has also started mapping Sad YouTube, based on locations mentioned by commenters. He says about half the comments on the site mention a specific place, city, or country. 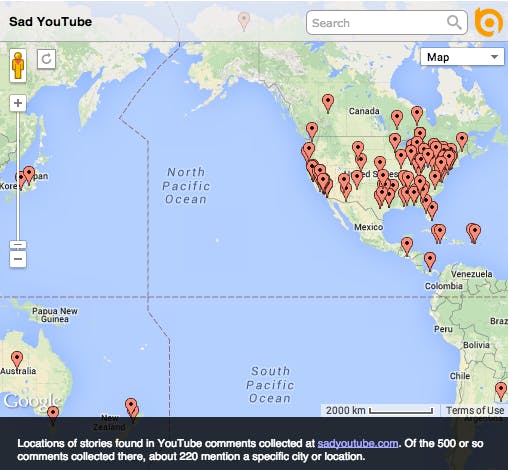 Slutsky actually did reach out to a few commenters, partially as a way to assure himself these detailed accounts of humanity and nostalgia were real and not some troll constructs. He tracked down one man who witnessed a car accident in 1962 as a song by the Tornados was playing. He was 13 when it happened:

I’ve never really forgotten it. I could even tell you things about how the doors were after the accident, everything. It’s frozen in my mind. I’m an artist, I could actually draw the scene if I wanted to. That night was the first time I’d heard the song, and ever since, when I do, that thing comes back.

That clip he commented on, like many others on Sad YouTube, has since been removed. Even sadder, all the comments went with it, but that just makes Sad YouTube’s role as record-keeper even more important.

In his bio, Slutsky maintains that the YouTube comment section is “unfairly maligned.” The influx of trolls, hate speech, and Reddit comments from entities like Le Reddit Armie are an eyesore, but Slutsky says that’s just a “blip” in the bigger picture.

“When videos don’t get deleted, they become a very deep archive,” he said. “So Le Reddit Armie is just one or two lines on the tree trunk.”

He also pointed out Google‘s role in shaping the comment section.

“Google got way more hardline and annoying about enforcing a real names policy,” he explained. “And trick[ing] people into creating Google+ accounts to comment on YouTube. And when that happened I sort of predicted that the tone of the comment section would change.

“I think the anonymity of YouTube comments—while, on the one hand, leads to the worst of YouTube comments—makes it sort of a weirdly safe space for people to tell stories about their life that they might not tell their Google+ friends or might not share on Facebook. You wouldn’t want your wife to know you’re still in love with your girlfriend from high school.”

And yet, that’s the draw of Sad YouTube comments. We get a glimpse of a strangers’ life, a detailed memory we can draw ourselves into. “Don’t read the comments” is fine advice, but sometimes we miss out on a crack where the light gets in, some glimmer of humanity. Something that makes us stop scrolling.