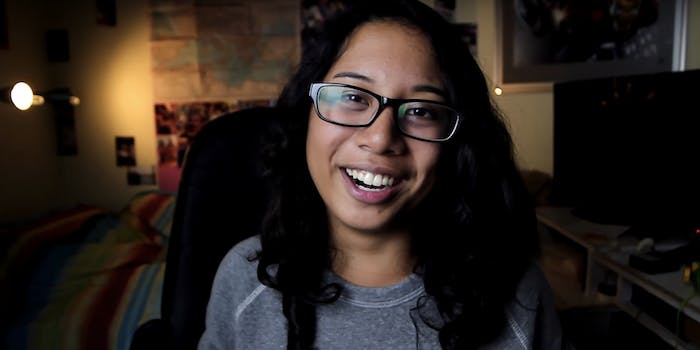 #WCW Sabrina Cruz is the queen of the nerds

Being nerdy never looked so good.

With numerous channels, a webcomic, and job hosting the Vlogbrothers’ latest educational venture, Sabrina Cruz is firing on all cylinders on YouTube. And she’s just getting started.

It’s so easy to feel a kinship for YouTube creator Sabrina Cruz, the woman behind Nerdy and Quirky. Between her National Geographic background and her smart humor, Cruz’s videos give you confidence in being different.

The 17-year-old Toronto creator launched her home channel (NerdyandQuirky) in 2012, and in the past three years, she has earned over 6 million views through videos that straddle the line between thought-provoking and wildly entertaining. Her video menu serves a little bit of everything, from light-hearted, comedic vlogs covering education (“The Sad Life of Vincent Van Gogh”), fangirling (“How to Take Care of a Fangirl”), and general life (“Imaginary Boyfriend R.I.P.”) to conversation-starting videos on feminism, body shaming, YouTube culture, and creativity.

In one recent video, Cruz weighs in on the recent controversy caused by Nicole Arbour’s now-infamous body-shaming video, “Dear Fat People,” pointing out that there is a difference between producing edgy comedy and just being offensive at the expense of other people. It is a great comfort to know that young YouTube viewers have Cruz to look up to as a role model and example on how to approach life with authenticity and boldness.

Outside of her main YouTube channel, Cruz runs a daily vlogging channel and music channel (The Serious Biscuit), hosts the Vlogbrothers’ Crash Course Kids series, creates the comic strip Elise following the adventures of a teenage girl, and founded What the Fanfiction, a YouTube channel in which creators around the world read some of the Internet’s most peculiar fanfic. So in summary, Sabrina Cruz is taking names and kicking ass all day, every day.

What continues to excite me about Cruz and her videos is the underlying message each holds of taking pride in being completely yourself. They’re a celebration of fangirls, nerds, feminists, and everything in between, and even as a 25-year-old woman, I’m inspired by Cruz’s appetite for creativity and passion for life. So cheers to you, Sabrina Cruz, and your many more YouTube milestones to come.

Screengrab via Nerdy and Quirky/YouTube