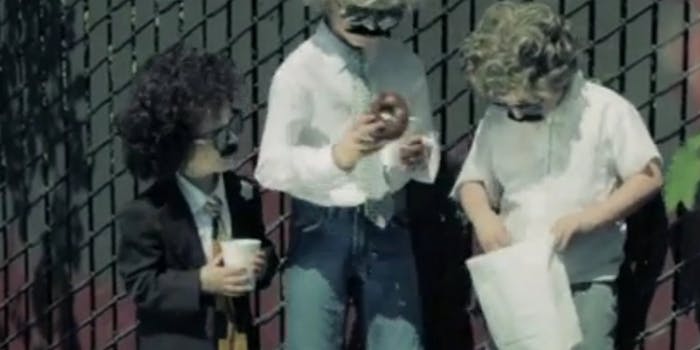 Behind the scenes with the “Sabotage” crew

James Winters' kids are viral stars after their charming Beastie Boys tribute, but he doesn't want it to go to their heads.

Most people’s home videos don’t rack up half a million views in one day. Then again, “Sabotage/MCA Tribute” is anything but ordinary.

It’s an adorable and pint-sized homage to the late Adam “MCA” Yauch that perfectly captures the playfulness and creativity of the Beastie Boys.

James Winters—a nonprofit administrator from Portland, Ore., with a penchant for backyard filmography—is the man behind the viral sensation. With the help of his kids and nephew, Winters reenacted the Spike Jonze-directed music video for Beastie Boys classic Sabotage.”

Since Winters posted the tribute on Vimeo over the weekend, it has accrued more than 477,000 views.

“I grew up with the Beastie Boys,” Winters told the Daily Dot. “I went and saw them back in 1987 at the tender age of 14, and it made such an incredible impression upon me.

“They took me from a punk rock kid and opened my eyes to hip-hop. I always saw them as such a force of unity, love, and joy. MCA was one of those people you kind of consider a brother, and it really hit me hard. I was sitting at my computer the night that I got the news and decided that I was going to make a video of ‘Sabotage’ with my kids.”

His wife thought the project was a great idea, too. And, considering that their nephew was visiting from Seattle for the weekend, the pair predicted it’d be a great way to have the kids do something more constructive with their afternoon than play video games. They created the storyboard for the shoot, figured out their locations, and put together the necessary costumes to turn the three kids into MCA and bandmates Ad-Rock and Mike D.

“My kids are troopers,” he said. “We’ve done a few things like this before, but we’re trying not to fill their heads up too much. We’re trying not to get too excited about half a million views. They still have to go to college and everything.

“They’re really sweet kids, and they’re smart and nice. I want to make sure all that stuff stays there and nothing goes to their heads.”

That’s another way of saying that you shouldn’t expect to see his kids on the silver screen any time soon.

“The reason I did this was to show love to somebody,” Winters said. “It would be kind of creepy to try to work any more stuff out of it. Right now it’s all about MCA and his family. He was a great father and a  great human being who did so much good for this world. I want to make sure that his spirit is recognized and remembered.”