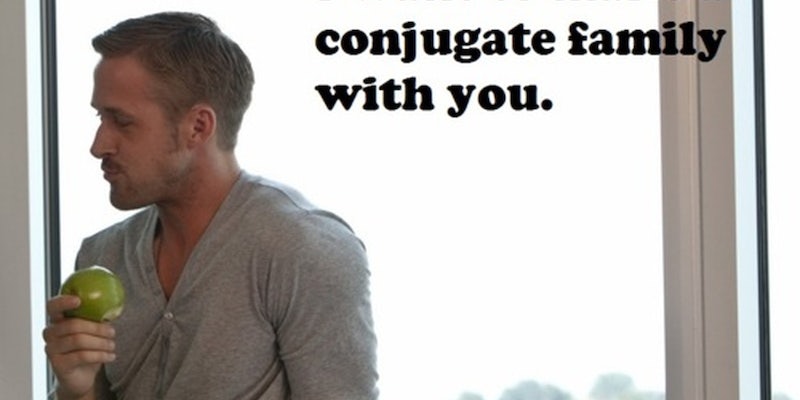 We know you were jonesing for another Ryan Gosling Tumblr. Like biostatics? Hey girl, this one is for you.

Hey girl, there’s a Ryan Gosling for each and every one of your hobbies. Which Gosblr is your favorite?

There’s something about this chiseled actor that makes him the perfect everyman for pinning all our fantasies on, no matter how specific. It’s appealing—and a little bit funny—to believe that there’s a handsome man out there just dying to geek out with us over our favorite hobby. Thus, the term Gosblr, coined by Daily Dot founding editor Owen Thomas to denote yet another Ryan Gosling Tumblr.

This week, Gosling’s romantic gaze is paired with musings about theorems for Biostatistics Ryan Gosling !!!, complete with three exclamation points. In what reads like gibberish to the uninformed—but dirty talk to Bio majors—Gosling appears to ask the viewer about his or her p-value.

However, there is no way to do that: There’s neither an Ask or Submit page. Nor is there a contact email.  We get it: sometimes we get distracted by Gosling’s dreamy gaze, too.

Launched on December 2, the blog has experienced a surge of traffic today from Boing Boing science writer, Maggie Koerth-Baker. With 17 posts, or about 4 a day, the blog’s author doesn’t seem to be running out of sciency witicisms.

Biostatistics Ryan Gosling might be the most specific Gosling fantasy yet. That is, until we create our own fantasy Tumblr: Daily Dot Reader Ryan Gosling.