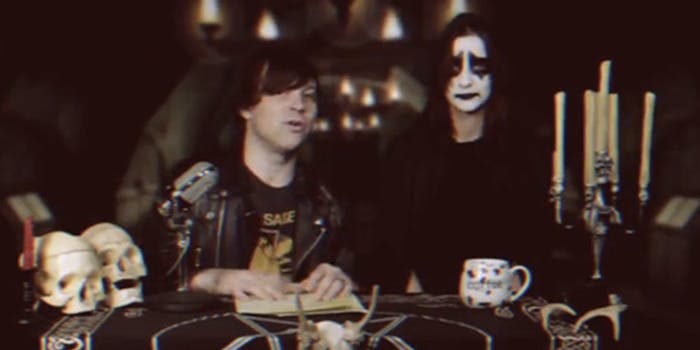 Directed by David Black and featuring Stella Berkofsky as Balphazar, the debut installment plays out like a late-night, black metal version of Wayne’s World with the stoner ethos of Beavis and Butthead.

Night Sweats serves as a roundabout publicity stunt for Ryans’ new album, Ashes & Fire, but the video’s countless WTF moments seemed to catch everyone off guard, including his wife, actress Mandy Moore (@TheMandyMoore).

“Yep. This is my hubby” she tweeted.

In the segment, the former Whiskeytown leader pontificates on Danzig’s “How the Gods Kill” (“This is the period of [Glenn] Danzig’s career where he was super beefed up.”) and Norway’s Emperor (“The finest example of black metal, technical and otherwise”).

While the video may be an elaborate prank, Adams had enough YouTube sense to add an accompanying Night Sweats playlist, featuring the aforementioned acts, plus Satyricon and Darkthrone. And, there’s even a veiled shot at the popular Symphony of Science YouTube series in a segment featuring the special “guest,” Joey, a talking frozen piece of pizza.

This isn’t Adams first foray into metal, either. He once launched an Internet only side project called Werewolph; released a “legit” metal record, Orion, on his PAXAM label; and more recently, covered Iron Maiden’s “Wasted Years” for BBC Radio 2, a shockingly stark revision that sounds more in line with the British psych-folk of the 1960s.

Personally, I hope Night Sweats not only continues but that there’s a collaboration with YouTube’s Vegan Black Metal Chef in the near future.