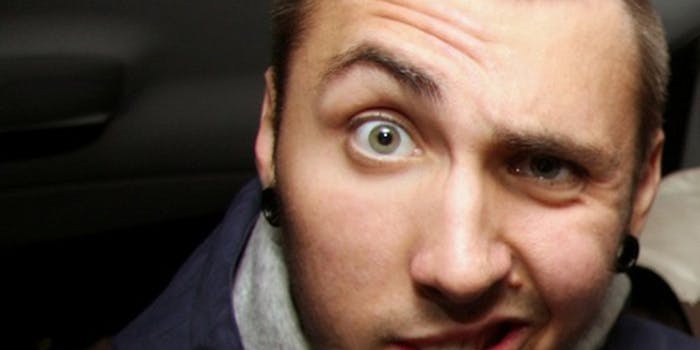 YouTube comedian Ray William Johnson is getting a run for his money now that Maxim Golopolosov has added an English channel.

Move over, Ray William Johnson! A funny video host on YouTube is coming to town, and he’s from Mother Russia.

YouTuber Maxim Golopolosov began making videos in Russian on his channel, AdamThomasMoran, in July 2010. But earlier this week, he added a new English channel.

Max, as he’s known, is the most subscribed to YouTuber in Russia, and his 72 episodes have been viewed collectively more than 434 million times to date. Views for each episode range from 2 to 9 million.

Max follows the same formula as Internet comedian Ray William Johnson (RWJ), who has been called YouTube’s first millionaire thanks to the commercial success of his YouTube show “= 3,” where he provides commentary or makes jokes about videos currently going viral.

In fact, Max lists RWJ in his YouTube bio as his only influence.

As a nod to RWJ, Max’s show is called +100500. While RWJ comments on videos mostly from English-speaking countries, Max gathers them from all over the world, making his show a favorite among video-watching enthusiasts looking to see something new or undiscovered. Max also dresses up as characters in mini skits that accompany his commentary, all filmed in front of a leopard-print background.

Earlier this week, Max launched a new channel, where he does the same episodes, but in broken English. Thus far, the first episode has received 600,000 views.

“I usually speak Russian in my videos, [but] you guys keep asking me to add subtitles. I say, Fuck subtitles!” Max says. “I’ll just use Google Translate. Sorry for my terrible accent, it’s just the way my mouth works.”

The video is somewhat not safe for work, and the humor is a bit juvenile, with some jokes lost in translation (though the bits about American and Russian culture are rather illuminating). Overall, it’s a fun afternoon diversion.

Already, a mini-flame war has begun in the comments section, with many YouTubers proclaiming Max “is better than RWJ.”

“you﻿ all seem to be so pissed with rwj, ye dwellers of american internets, that you find any new guy around to be fascinating,” commented tYlK0o1sO1kG0vN7a1I1, perhaps an RWJ fan scoping out the competition.

Other YouTubers have taken to asking for +100500 in other languages, such as Spanish or Hebrew. Over on the Russian version of the same episode, MolotovOwnage  proudly declared that he would “never watch these videos in﻿ English.”

hisgermansunshine said she would watch both versions, because she is a “sucker for accents,” and finds Max’s voice “sooooo sexy.”