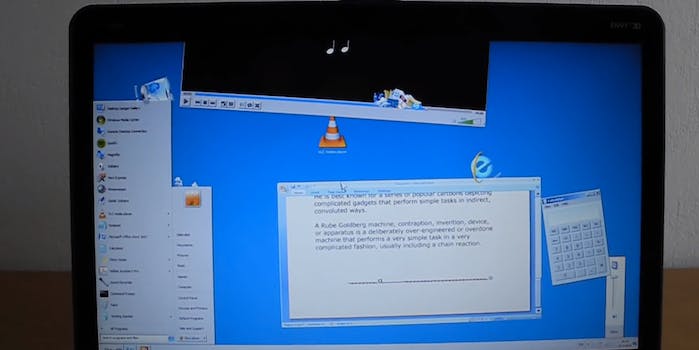 Spice up your workday with this digital Rube Goldberg machine

What if your recycling bin could send your Internet Explorer icon crashing into pieces?

Rube Goldberg machines often look so good they seem like they’re animated, so one animator has taken that leeway to its logical extreme and created a fantastical video that imagines if a chain reaction could exist between the world of your computer screen and the desk it sits upon.

Freelance animator Evelien Lohbeck’s short film Deskloop connects the actual desktop with the computer world, as the computer fan kicks off a domino chain of floppy disks, circles back to the world of the computer, and ends with a CD-ROM ejection that reveals the credits.

The only downside to this amazing video is it puts doubt in your head that all the amazing Rube Goldberg videos you’ve seen before are in fact clever animations.

Update 1:49 PT: When reached for comment on the inspiration behind the video, Lohbeck told The Daily Dot, “I am very fascinated by the border/boundary between reality and fantasy. Playing with the expectation of the audience inspires my work. In this film I wanted to mix the physical world with the digital world by using a chain reaction of real objects and taken over into the digital world/desktop.”