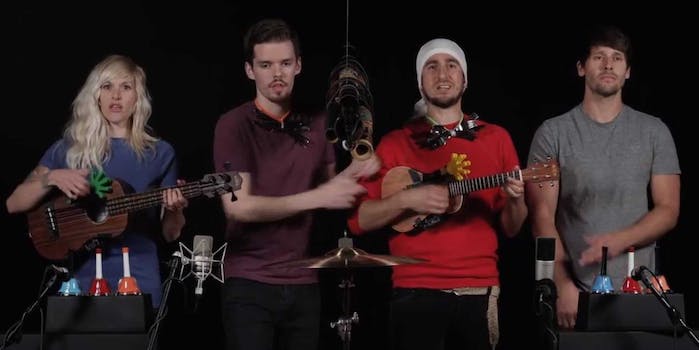 Is “Royals” YouTube’s new “Somebody That I Used to Know”?

This might be the beginning of the end for the hugely popular single from 16-year-old New Zealander Lorde.

Last year, YouTube’s Walk Off The Earth dropped one of the best covers of Gotye’s “Somebody That I Used to Know.” Now they’ve done it again, albeit with a slightly less-ubiquitous pop single.

This time, their target is “Royals,” the new hit from 16-year-old New Zealander Lorde, which they somehow manage to reinterpret with four ukuleles and one didgeridoo. They toss instruments out of the frame, clap hands, and pat out rhythms on a band mate’s ukulele.

Of course, this video could signal the beginning of the end for “Royals”: It doesn’t take long for YouTube covers to reach a critical tipping point of overexposure, from which there is no return. Just ask Gotye. And Psy.

Photo via Walk off the Earth/YouTube